“Come running through the forest of your thoughts and collapse into the clearing of grace.”
– Morgan Harper Nichols

I have sat down with my computer several times since the beginning of 2021. And every time, I stare at the blinking cursor, wondering what on earth I could say when there is already so much noise in the online space. I think the online spaces have always been noisy, but particularly so lately. I have written previously about feeling like a sponge, and that has only grown exponentially truer.

I am as guilty as everyone else when it comes to how much time I spend looking at my phone, absorbing the noise and hustle and posts and reels and complaints and praises of everyone else. So much of it is heavy and dark and draining, but so much of it is so, so good. It does me good to read the words of wise people who have collected their thoughts and penned them with such care and effort. Their thoughts often help me organize and understand my own.

So I open up a blank document to see what words of mine are there, and the cursor just blinks. Why?

I don’t think you should have to make noise just because it feels like everyone else is.

I do think it is easy to feel pressured to make a lot of noise when it seems like everyone and their mother insist on saying you must shout with the rest of them about whatever currently needs the most shouting about. 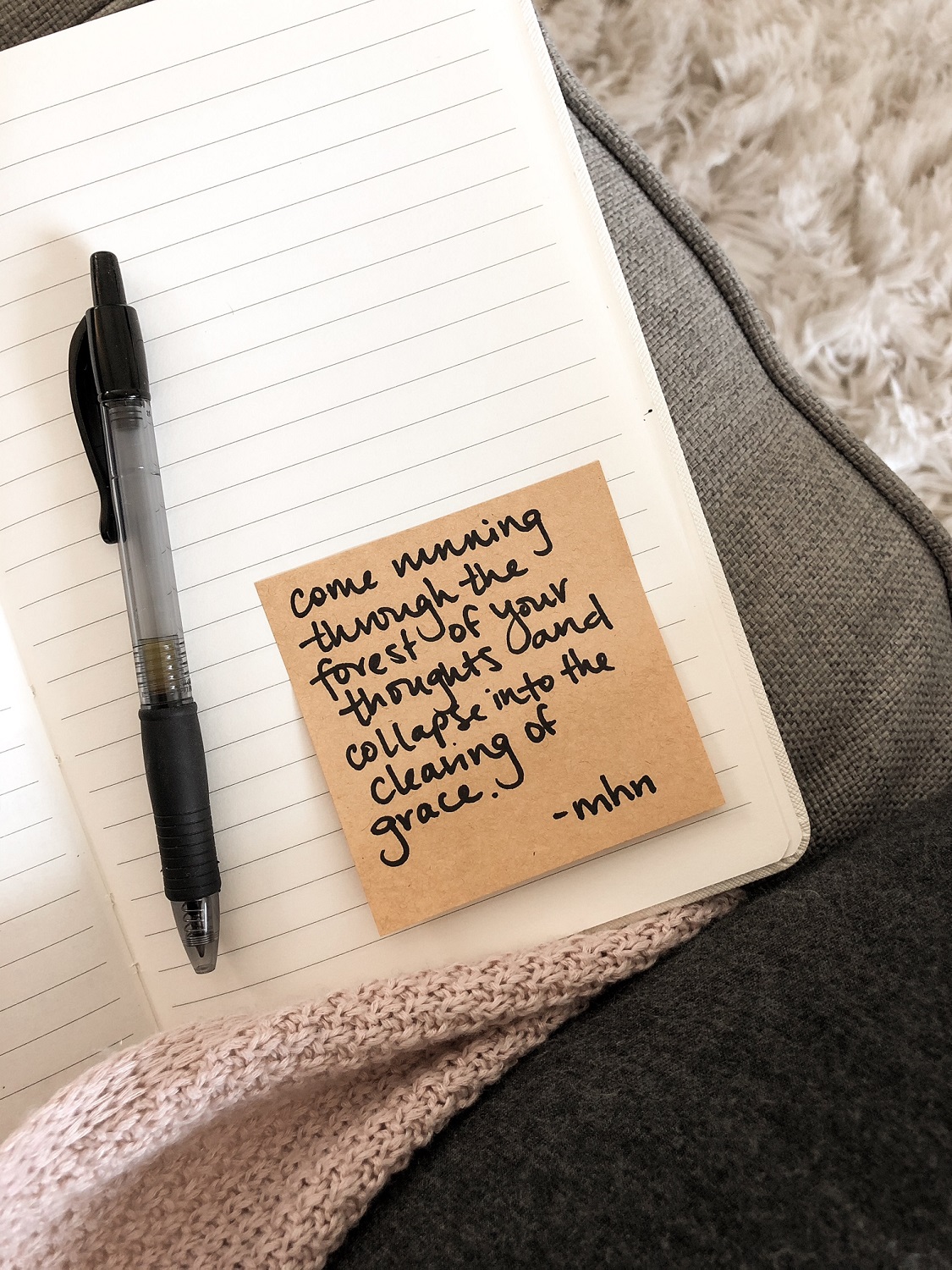 This is simply not the case. Are there many important truths that have gone unsaid for far too long that need saying? Yes. Should the masses assign the individual, timing, and decibel level for the delivery of those truths? I think not.

I wonder when people decided that silence no longer meant thinking but passive. I wonder what would happen if instead of standing in our corners and speaking about what should be done the moment the words formed on our tongues, we sat in our corners and thought about it first. I wonder what would happen if we stopped listening for the purpose of becoming a robotic echo and actually listened to understand and care for them better.

Truth, being a person, has attributes, like gentleness and kindness, that are not to be shed like a stiff coat the moment something important must be delivered. They are essential to the message. It makes me appreciate all the more those who are careful with their words and respond (rather than react) with grace saturating every word.

With the overwhelming amount of noise going on, I am convinced that one of the heart cries of the individual is: “Do you hear what I’m saying?” And if that is the question, then perhaps it is not a good idea to scowl across the room at those who have decided to answer that cry by closing their mouths and opening their ears.

“Why settle for having an opinion when you can be an example?”
-Maria Goff

I don’t think you have to warm people against the dark in the same way others do.

For a long time I have loved the phrase, “Preach the gospel at all times. And when necessary use words.” It captures a tendency in the human heart to not actually practice what we preach. To rely only on our words to display how we live rather than letting them permeate all of who we are and shine through in our behavior, our tone, our facial expressions, and our habits.

But I have also heard a pastor I admire say, “Well, Jesus himself often found words necessary. And I don’t think I can live it out better than He did.” 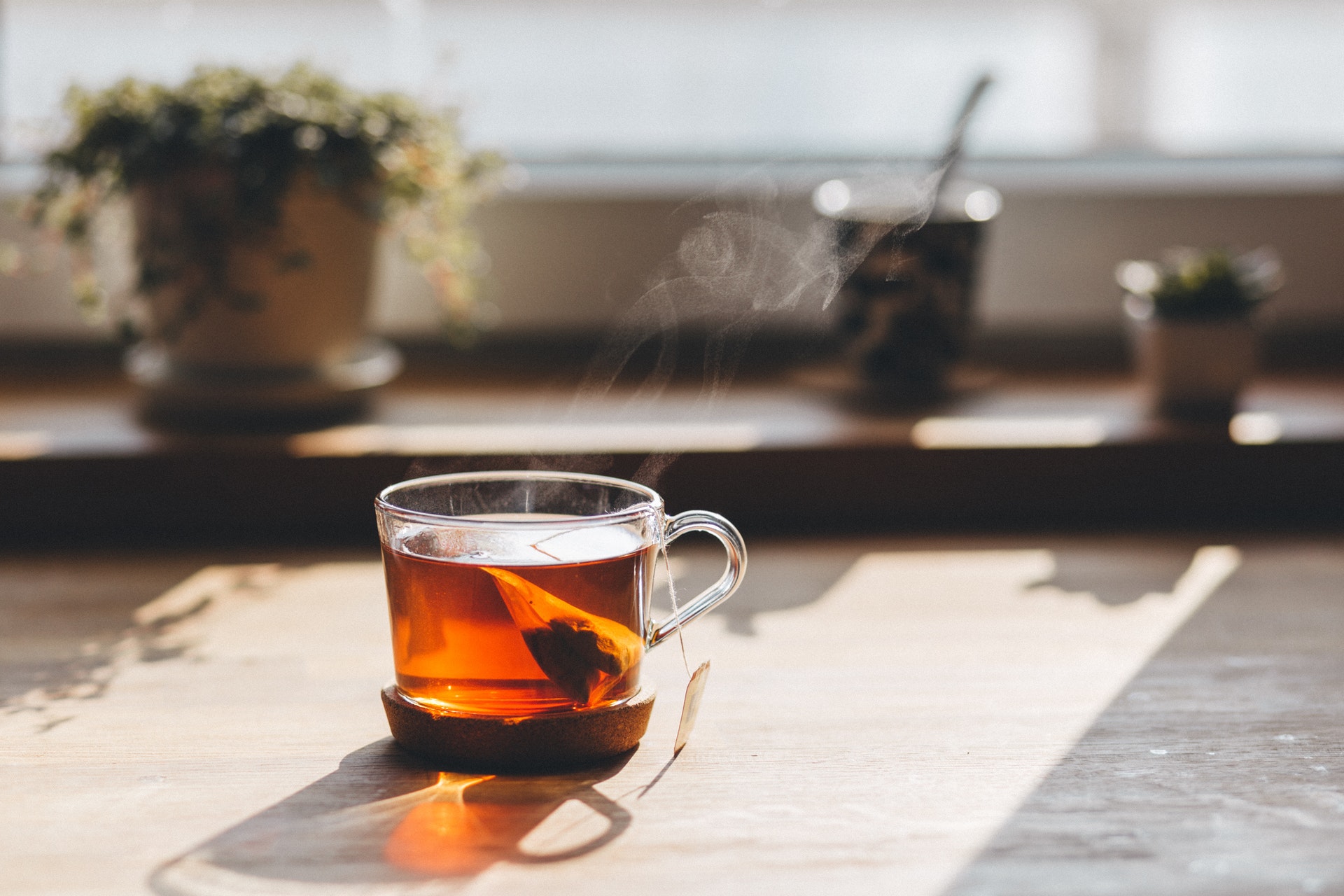 Well put. So words will often be necessary then, and this brings to mind two things:

I’ve been thinking about bonfires, that blaze and burn brightly. You can smell a bonfire before its close enough to see. They light up the dark and send up smoke in the day, and both can be spotted for miles. You don’t have to draw too close to feel their warmth because the strength of their flame is so hot, and that heat might scorch you without realizing if someone does step too close. They crackle and pop with energy and life and shoot sparks high above them. They naturally draw community around them, especially when the surrounding cold is bitterest, and they thrive with the air everyone expels around them. After everyone leaves the smoke lingers like a deep, ancient perfume on their clothes, in their hair, and in their skin.

I’ve also been thinking about cups of tea. The leaves have been pressed and dried. They soak in hot water for quite some time, and that time varies depending on the mixture of leaves and spice. Then when the cup is set steaming on the table, it is completely silent, and you might catch a trace of its scent if you are in the same room, but you really have to lean in close to smell the cinnamon steam. The first sip might burn you if it hasn’t cooled long enough yet, but it is ready in time. You take a sip, and it warms you from the inside with gentle steadiness, and the taste rests on the edge of your tongue in a way that makes you want to sip again. Cups of tea are often found with pairs or small groups of people, to warm the body on cold days or help push away the drowsiness of sleep from the mornings.

I think there are lots of people who fall into one of these categories, and I think both are beautiful and powerful and needed, because the way you deliver your words is just as important as the words themselves. I think, like all things, there are pros and cons to each approach, but neither is better or worse than the other. There are always going to be people out there who have been burned by one and warmed by the other, but that should not give them license to say that you must change the one you are to become the other.

I think if you are consuming what everyone else is, you’re going to end up striking the same note on the piano as everyone else when it’s your turn to play.

Lately I have made an active effort to listen and see with intentionality rather than accepting what each day has shown me and played for me.

You can choose which things you turn the volume up for and which ones you reduce to a faint murmur in the background or mute altogether. And there is plenty to mute altogether, because frankly, we are overwhelmed with way too much stuff, for too many hours of the day, for too many days in a row.

There is a bird that has decided to perch on the roof above my window each morning this week and chirp and chirp from 6:00am to 8:00am like his heart will burst if he doesn’t. Encountering this sound first in my day is so much gentler than the traffic on my street that I can hear rumbling by if I listen past this little winged friend. 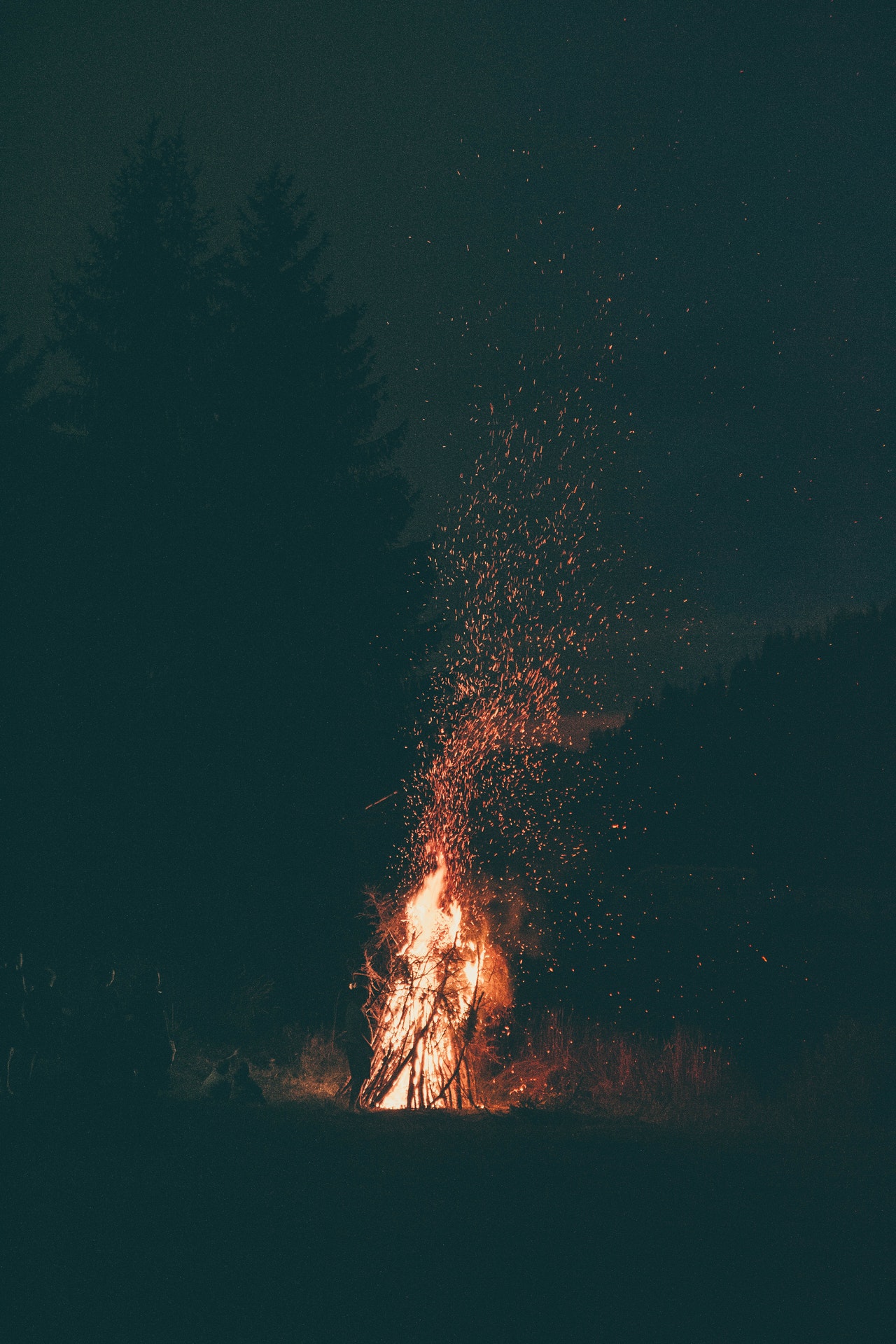 So while I could set my alarm tone to be the radio station that reports the news of the morning and the traffic delays on the roads I should avoid, I have set it to mimic the bird on the roof on the days I wake up before him.

I have recently discovered the joys of different ambience you can find on YouTube and set as the background of the tv. So when I am studying in the morning or reading in the evening, I can put on videos of snowy forests, rainy coffee shops, or the dreamy grounds around the Pemberley Estate, and listen to music that compliments each. Violin, jazz, piano, water on rock, rain against the window. Violin and piano alone, I almost never hear in my day-to-day life, but they are absolutely beautiful, and I find that turning the volume of these up turns down the noise of the sirens and the motors and the horns on the street outside.

I find soundtracks from movies that have moved me in the past. I listen to people read poetry aloud. I lay down on the floor and listen to entire albums from start to finish with my eyes shut. I disable notifications from email and media apps on my phone. I unsubscribe from daily email promotions that only end up distracting and are normally deleted anyway. I’m selective about whose voice gets to speak into my ears during my commute to work in the morning because those words are going to influence my mindset for the entire day. I purposefully make space, even if it is just for 60 seconds, for uninterrupted silence. No radio, no music, no videos, no typing. Just me and my thoughts.

I close the glows from screens and instead light candles, even when I’m the only one in my apartment to enjoy them. I acquire more and more green things (living or not) and place them in places I spend a lot of time at, like beside the kitchen sink, on either side of the tv, or on my nightstand. I turn off overhead lights and open up the blinds on all the windows instead. I write on physical sheets of paper and create even lines in the carpet with the vacuum. I pour drinks into glass rather than plastic because I like the shine. I read books by people who have different views than me, and I don’t get the same thing on the restaurant menu every time I go. I don’t watch anything on tv that will make me suspicious of the dark corners in my own home, even when the storyline seems really good, because understanding the hype about a movie or show at the cost of a peaceful night’s sleep is too expensive for me. I unfollow strangers online when I find myself using the squares they have posted as a measuring stick for my own life.

I once heard someone say that you cannot manage what you are not willing to measure. These little decisions are my first steps in the direction of managing the noise. Of excavating the space I occupy and clearing out the clutter to make space for good, lovely things. Because I think that what you have to say, and how you’re going to go about saying it, has a great deal to do with what you have been listening to.

There is so much to filter through, good and bad. Ugly and praiseworthy.

The world needs bonfires who blaze against the dark, who stir and champion our hearts to stand once more in the face of it, sending up a smoke signal for those who are lost to see from miles away.

The world also needs more people who have their ears pressed against the ground, listening and feeling for the tremors that go unheard among the clamor of our days, brewing strong and steadily, sending up curls of steam to warm the nearest passerby. 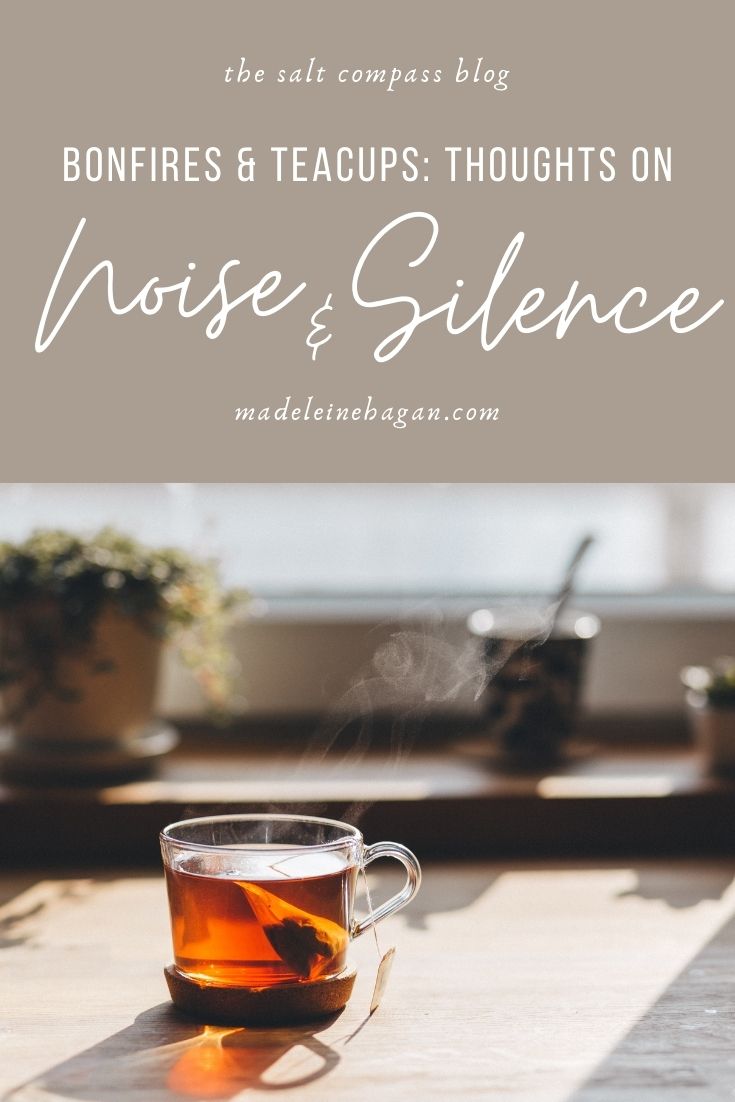