I recently wrote a separate post containing a full review about this book here. I meant to write one of those last year when I had read Adorning the Dark for the first time, but I only just got around to getting the words down on paper as I read it a second time this year. It was just as good the second time, and I have a feeling I will make it an annual read. 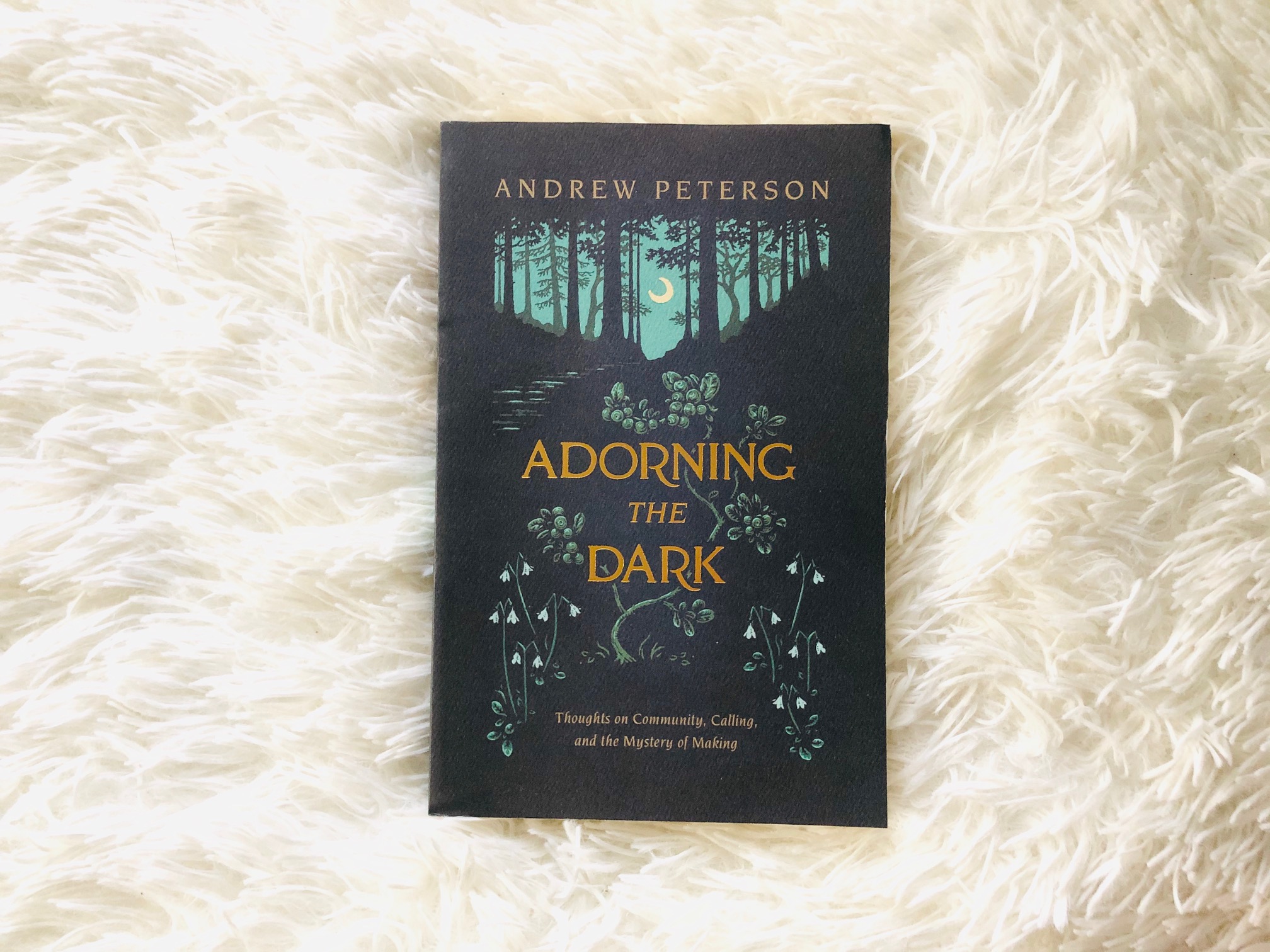 Miracles and Other Reasonable Things by Sarah Bessey

This is another beautiful book. I heard the author recommended in an episode of Everything Happens with Kate Bowler and Shauna Niequist, and now I want to read pretty much anything this lady has written. She talks about unlearning things she used to think about God so that she can relearn rightly. She talks about the many different forms healing can take, and how usually it’s the way we least expect. She takes you with her to Rome and to Canada and to hospital waiting rooms. She talks about true unity across denominations and traditions that is rare and breathtaking. She talks about trying so hard to be “fine” and how long it took her to admit she wasn’t. She shares a glimpse at the heart of God that is such a joy to read about.

If you still aren’t convinced to go read this book, give this podcast episode a listen featuring two writers I absolutely love as they talk about rest (especially in pandemic context) vs pretense and productivity: 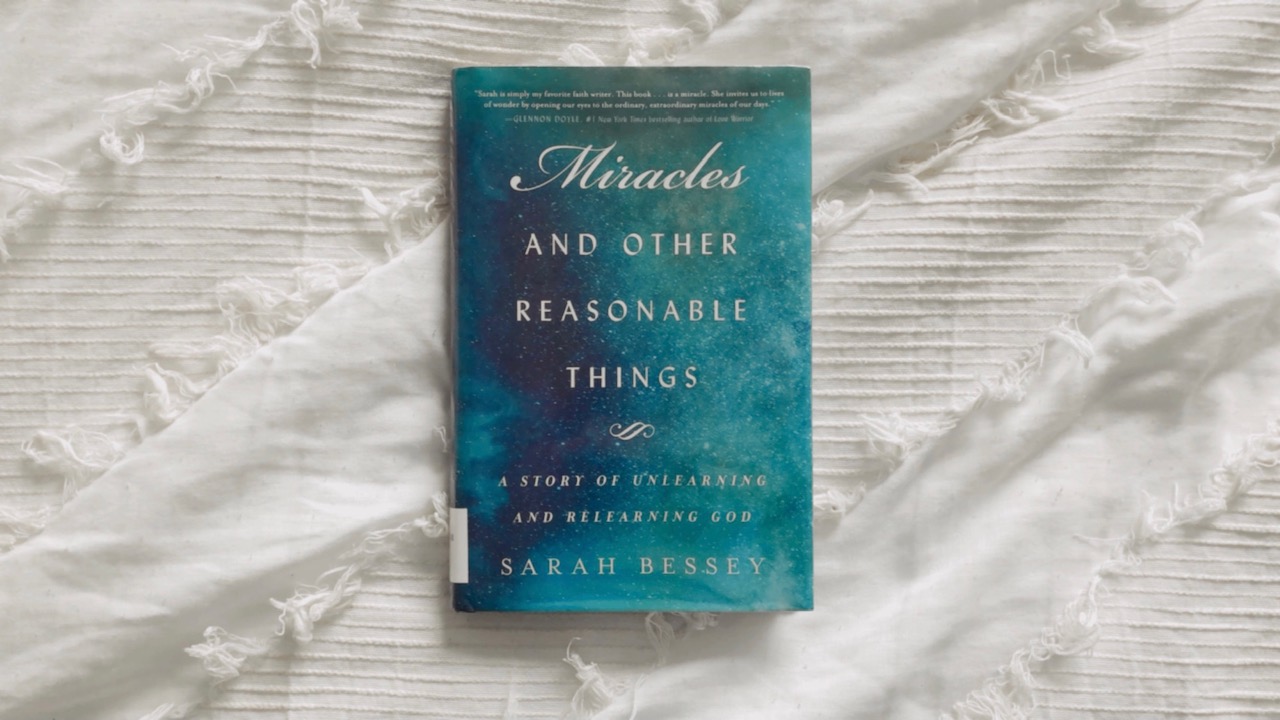 If You Find This Letter by Hannah Brencher

Every time I read a book by Hannah Brencher, I wonder if she has just been listening to some of thoughts. There are so many times I blink down at the words I see on her pages and say, “I have thought those exact words before. There is someone else out there who has thought about/worried about/cried about/laughed about/marveled about these exact things.”  And this book was no exception. I read Come Matter Here first even though technically that was her second book (and I reread that one this year as well), so when I found out this one existed I had to read it too.

This book tells the story of how she started The World Needs More Love Letters by writing a letter to a stranger in New York. Then, she writes a blog post asking to hear people's stories, and in it she promises to write back to every single person. Her inbox is flooded with replies as hundreds and hundreds of people share about their hurts, their doubts, and their situations, and Hannah writes back to them all. 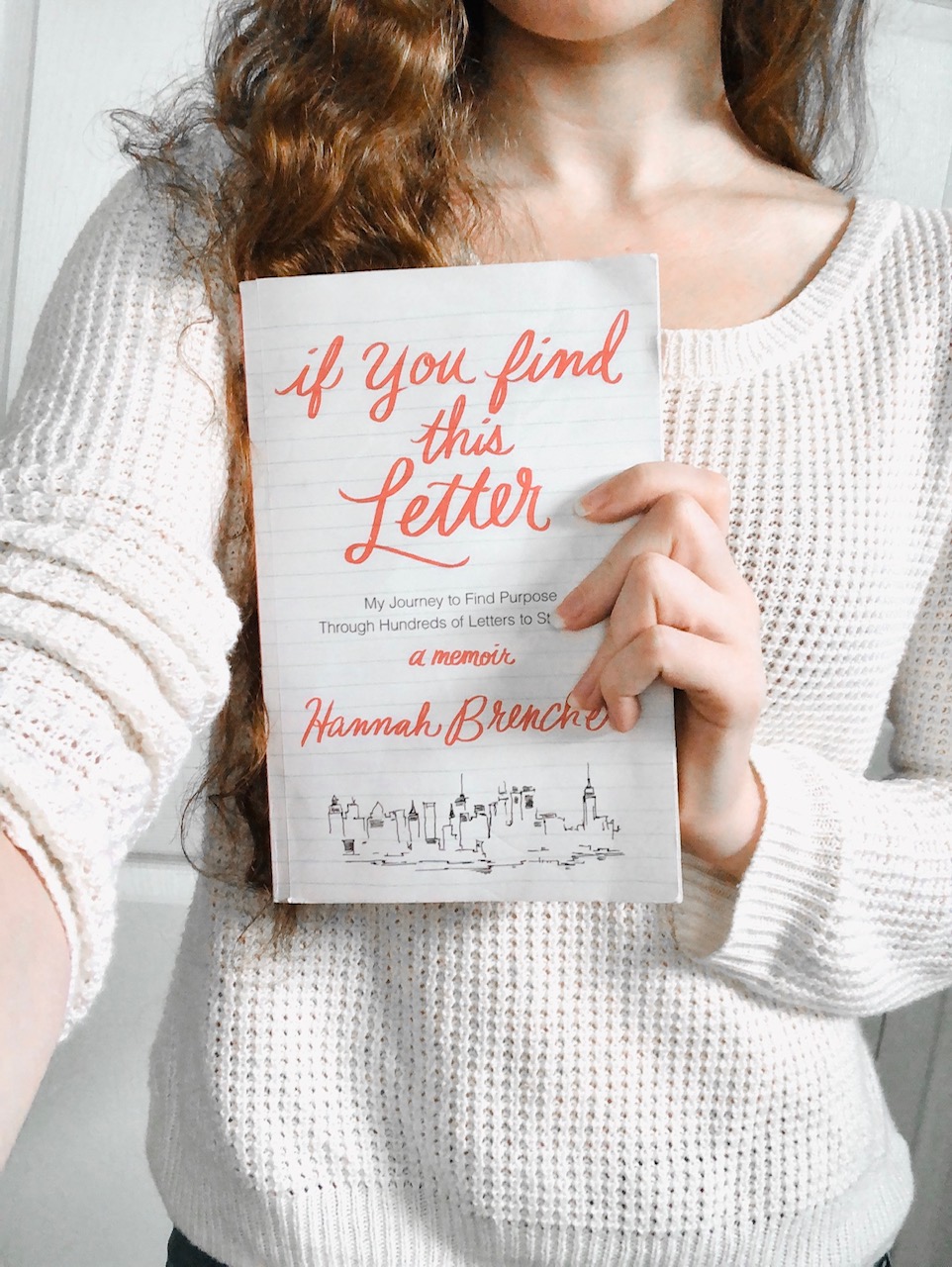 Courage To Be Healed by Mark Rutland

Mark Rutland explains how healing the Innermost parts of us is hard and takes great courage to even peer into, let alone take the effort to heal. This is a challenging (wonderfully so) book on inner healing and how to address different strongholds in our lives.

Get Your Life Back by John Eldredge

What I enjoyed most about Eldredge’s newest book was its pace. Most of his books feel like an unrushed conversation on a foggy porch in a comfortable rocking chair, and this book was no different. It’s a welcome reprieve from the YOU CAN DO IT HERE ARE 200 THINGS YOU HAVE TO DO RIGHT NOW TO KEEP UP WITH EVERYONE type of books, and ironically that is the subject of this particular one too. He explains how we are not designed to go through our days at the cruel pace that we do, with information overload, and three-second attention spans. He explains the value of taking just 60 seconds to pause and breathe and realign with the perspective and attitude we want to approach our days with. He talks about the process of reprograming our brains to slow down so that our lives don’t pass by in a blur that leaves us exhausted with nothing to show for it.

The Truth About Us by Brant Hansen

If you have been around here long you will recognize Brant Hansen’s name. His books are some of my absolute favorites and I can easily add this one to that list. In The Truth About Us, Hansen talks about how maybe…just maybe (or maybe most definitely) we are not as good as we think we are. And how that is actually really good news. 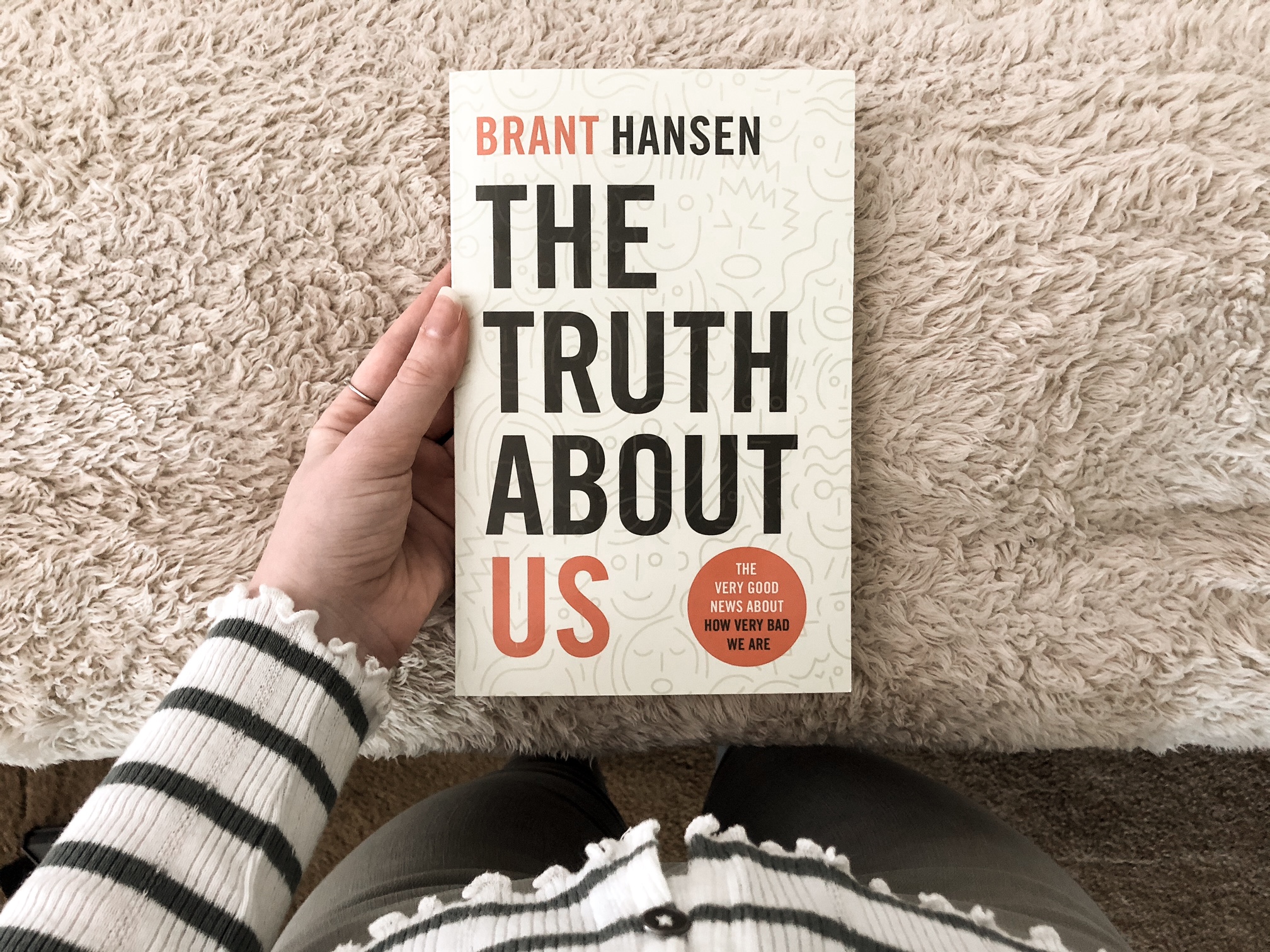 The premise of this book sold it for me. Alicia Britt Chole talks about how studies on the life of Jesus always focus on the three years of his public ministry, but she chooses to highlight his thirty “anonymous” years before that and explains how those years are what prepared him for his ministry when the time came because they built his character across many, many years of unglamorous and unrecognized faithfulness.

The Ministry of Ordinary Places by Shannan Martin

I loved reading Shannan Martin’s stories as she searches for what’s truly important within what appears to be some of the most mundane aspects of our lives. Sometimes (maybe most times?) our ministry is not what we would have originally imagined, and she gives the reader a glimpse of what this can look like in an honest and beautiful way. 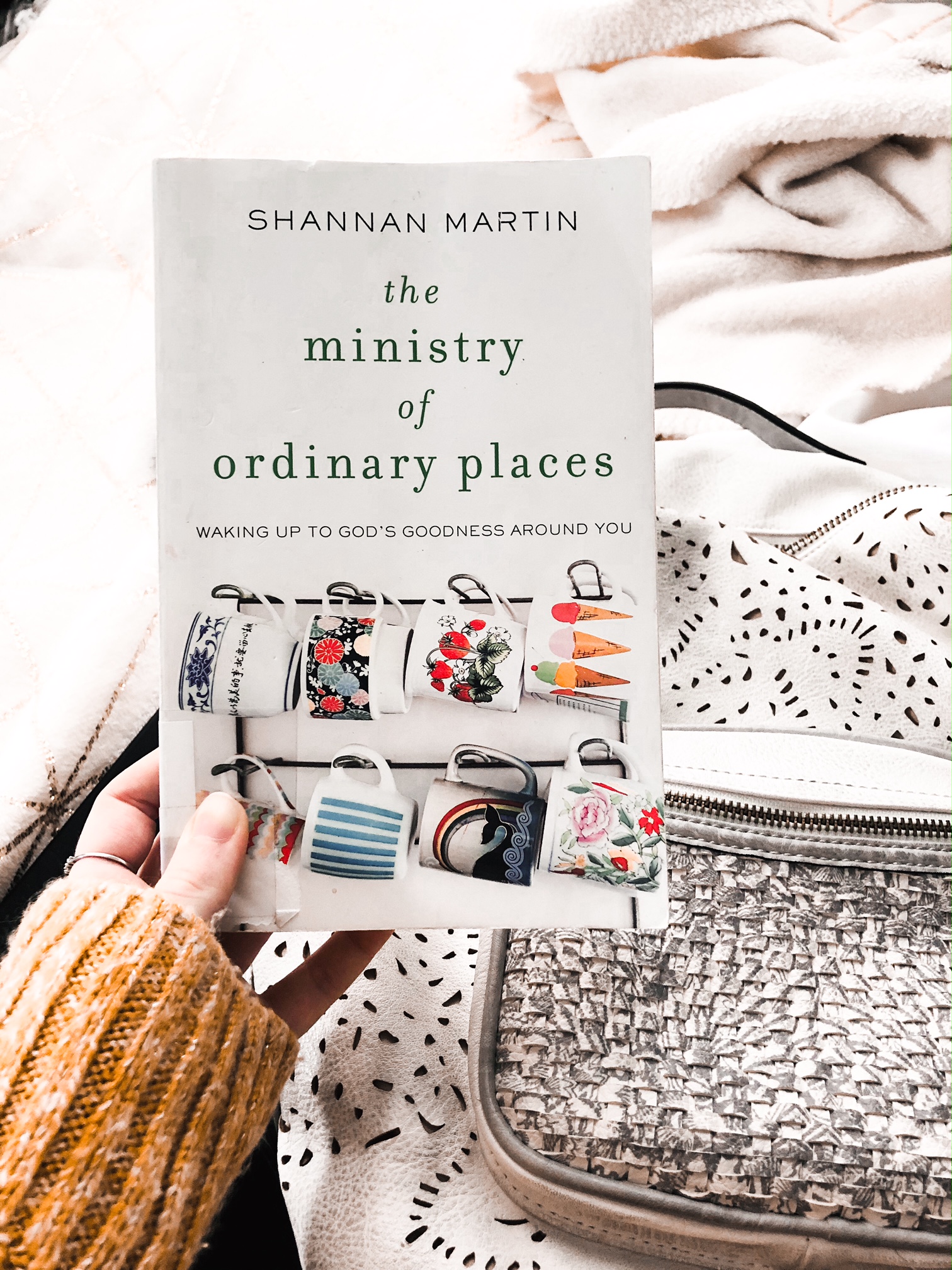 The Wind In The Willows by Kenneth Graham

I absolutely had to carve out space for this book this year since I have heard such wonderful things about it. As a child, I think my parents attempted to read this to me and my siblings more than once, but for whatever reason I wasn’t interested in the life of a Mole and a River Rat at the time and the attempt was usually abandoned after three or four chapters. Now that I’m older, I can appreciate it much more. Like a proper children’s book (or um any book for that matter), it has beautiful illustrations and the characters were endearing and funny to read about. From the beginning, the sheer delight that Mole has as the River Rat pulls item after item out of a picnic basket on a sunny summer day had me hooked on these two little creatures. I loved the sense of place that is so strong throughout the entire story, and I loved the deep threads that occasionally surface from beneath the rest of the story and hold the reader captivated with a phrase or a feeling. I will definitely read this again.

I finished rereading the Inheritance Cycle this year. This reread was long overdue, since I first read the series in high school, but I can happily say that these books were even better the second time around many years later. Complete with glittering dragons, powerful elves, old languages, and tyrannical kings, this story is epic, well-written, and full of characters you grow to love.

Paolini’s newest sci-fi book, To Sleep In A Sea of Stars is on my list to read in 2021.

Recommended by a friend, this book isn’t one that I would normally gravitate toward on the shelf, but oh am I glad I read it. The sense of place (a common theme I’m seeing in the books I’ve loved this year) in Virgil Wander is strong and the characters were so real. This book is about Virgil, who is returning to his home from the hospital after surviving a crash with a concussion and an altered perspective. I particularly loved how each of the characters were described, not with just their physical appearance, but by how each of them makes Virgil feel when he sees/interacts with them. His observations on each of them give the reader an instant, almost tangible idea of what that person is like, and this brings them to life.

This book is also one that I wouldn’t normally just pick up off the shelf, but my book club chose to read it and I have heard other authors I love speak highly of Wendell Berry’s work, so I gave it a shot. I was pleasantly surprised. This book is about, you guessed it, Jayber Crow, the town barber, who is retelling the story of his life and the people in it. It is yet another book that is steeped long and slow in the “sense of place” as Jayber Crow lives pretty much his entire life in one town with the same townsfolk. He belongs to this place and these people, he comes to realize, and I genuinely enjoyed hearing the place and the people described through his eyes.

The Ten Thousand Doors of January by Alix E. Harrow

This book is full of elements that I enjoy reading about: the power of the written word, travelling to other worlds through hidden doors, strange creatures, adventure, mystery, memory, evading capture, reuniting with family, and old journals that contain long sought-after answers.

“My long years of research have taught me that all stories, even the meanest folktales, matter. They are artifacts and palimpsests, riddles and histories. They are the red threads that we may follow out of the labyrinth.”
--Alix E. Harrow, The Ten Thousand Doors of January 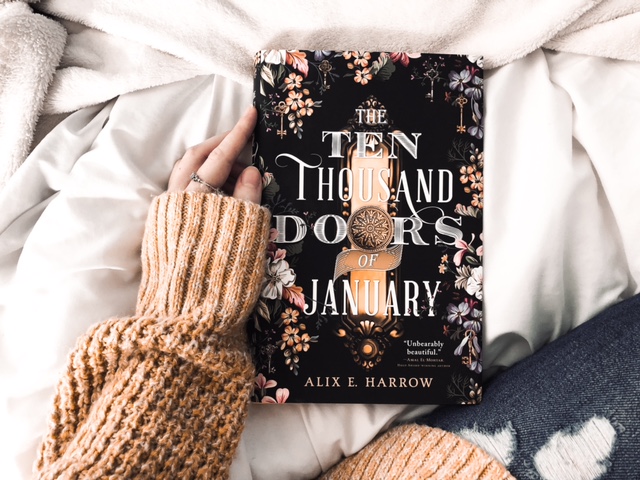 The Graveyard Book by Neil Gaiman

I finally read a book by Neil Gaiman (also very long overdue) and it lived up to the hype. I didn’t think that reading about a boy raised in a graveyard would be this engaging and fun to read, but I was happily wrong. Neil Gaiman’s writing style was wonderful and I think this particular book would make a very good read-aloud as it reads very much like a story that is being told. (Some stories, funnily enough, do not read very much like stories. Difficult to explain, but you probably know what I mean.) He manages to have some rather creepy elements in a story that doesn’t cross the line of being overly scary. I have added many of his other books to my list for 2021.

This book was like Ready Player One except the theme was Edgar Allen Poe instead of the 80s decade. A billionaire dies and leaves riddles behind in a game to win his fortune. And not all the players are playing nice. I really liked the main character, Tuesday, who was refreshingly not the usual stereotype that would be chosen as the main character for this type of book. She’s not a teenager. She isn’t trying to prove anything to anyone. She misses her childhood friend who disappeared one day without a trace. She likes doing research and understanding who people really are. She talks to ghosts. I enjoyed it from start to finish.

I had to include some poetry collections on the list this year because they were truly lovely. Helium by Rudy Francisco was beautiful to read. The poems are short but powerful and easy to flip through on an afternoon if you have some spare time.

All Along You Were Blooming by Morgan Harper Nichols

All Along You Were Blooming is another beautiful collection of poems and art. I have been following Morgan Harper Nichols on Instagram (if you don’t, you should too) for a long time and have loved the beautiful encouragements that she has posted there. Some are simple reminders that we just need to read and absorb on a frequent basis. Others are glimmers of light in dark times and heavy places. Either way, her account is a bright spot in the internet space, and her collection of these is no different. This book belongs near your coffee table, where you can pick it up easily in handfuls of spare time and read beautiful truths. 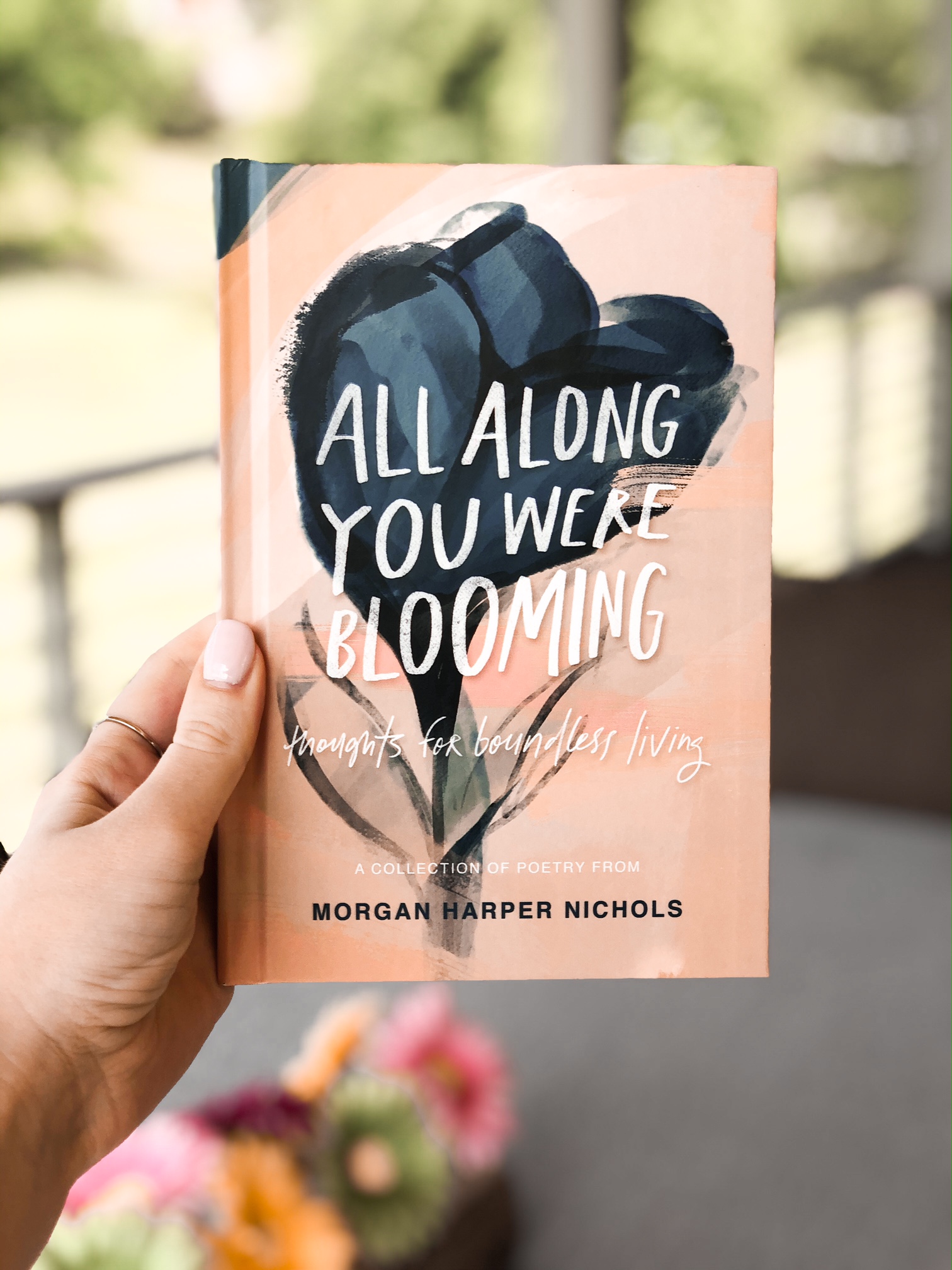 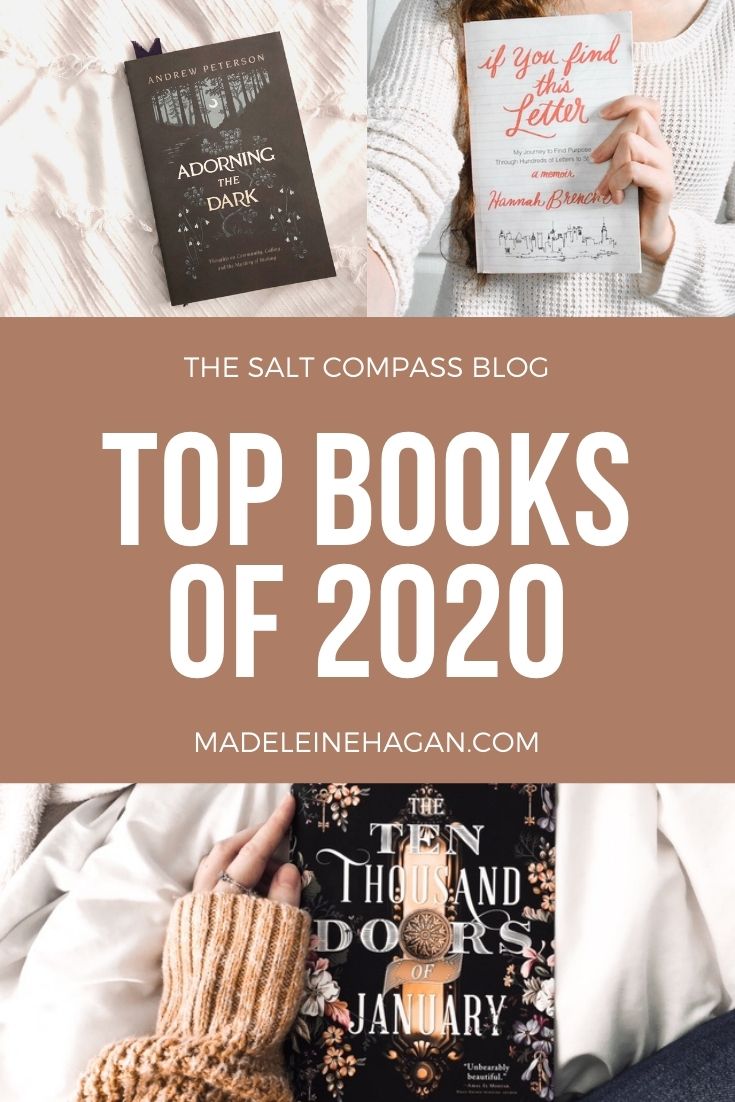