January has begun and is already almost over.

I feel like I start a lot of blog posts commenting on the natural process of time passing, but it’s because I haven’t gotten my head around the concept quite yet. Maybe it will click sometime in later years, but for now it hasn’t, and I still marvel.

I’ve discovered most of what I think and wonder about in January falls into two categories: backwards or forwards.

I’m right there with everyone else wanting this year to be different. Not because I hated last year. Not at all. Last year was one of my favorite years. But I’m looking forward to this one because it’s got that shiny, new quality to it still.

I don’t think that just because the clock struck midnight I now have a giant window of opportunity that’s somehow absent from the other 11 months out of the year. While fresh starts, new ideas, quitting bad habits, and trying new things can get forgotten about during the busy-ness of the year, January is a concrete reminder that they should be remembered each and every day. And I think of Valentine’s Day, Mother’s Day, Father’s Day, Pajama Appreciation Day, and more in pretty much the same way. Less significance in the actual day, and more emphasis in the daily habit or mindset they hopefully inspire.

So yes. This January has got me looking forward to lots of things in 2018. For lots and lots of reasons (more blogs about them coming soon). But so many possibilities and so many opportunities and so many unknown factors can also be intimidating. I’ll be super excited about all the new ideas, new projects, and new habits for a couple of days and then the doubts try to creep in. There’s worries with crippling ideas that whisper about “how difficult it’s going to be” and “how much I miss the way it was” the big one “what if…nothing is ever as good again?” And sometimes I’ll retreat to things that are more comfortable to think about. 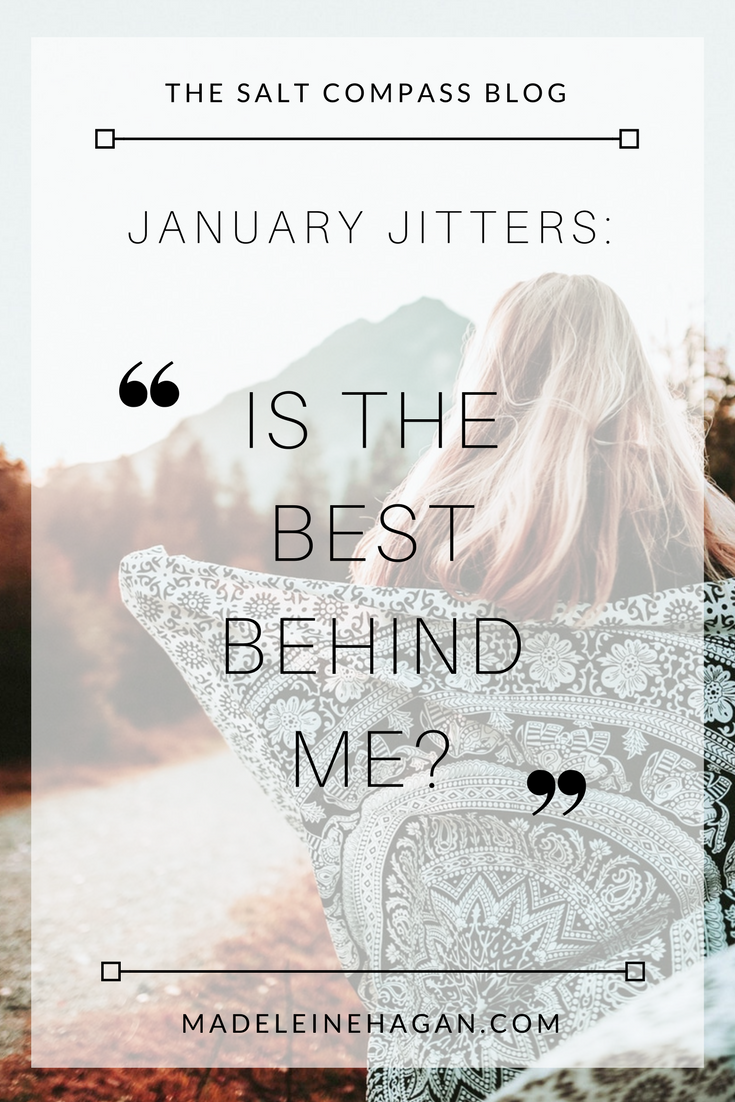 Which leads me to the flip side of the same coin: January (or perhaps New Years specifically?) also gets me reminiscing about some pretty great times in the previous year. And it’s here that my mind has been living lately. I wrote a blog post not that long ago about the mirror side of this post. I wrote about learning how to let go of a future I loved the concept of, and trusting God to plan it better than me. More recently I’ve been learning about letting go of events I loved that are now in the past. (Funny how God does that, right? He doesn’t cut corners. He wants it all.)

Don’t get me wrong, I write about memories, looking back, and sweet/sappy/sentimental things I never want to forget about all the time. I think it’s healthy to remember your favorite times.

It’s the balance I find difficult. There’s a fine line between appreciating good times you’ve had and wishing you had those times back instead of the present.

It’s difficult not to though, right? To look back and not wish you could live them again? I’ve spent a lot of time over the past few weeks doing exactly that. But living in my memories is not exactly how I would describe an abundant life. So I did some thinking and discovered a couple of things.

Problem: I’ve discovered I dwell on the past when I’m intimidated by the future.

Perhaps this is human but that doesn’t mean I have to like it. I mentioned before that oftentimes the amount of unknown in the upcoming year can be intimidating. But when I choose to focus on what I became familiar with, rather than what I could be challenged by, I lose opportunities to grow. Plus, I might overlook some chances to make even more great memories.

Translation: By living in the past I’m telling God His future plans aren’t good enough for me.

If I’m constantly bringing God my memories and asking Him to repeat them, I’m going to miss out on His better ideas.

Who am I to think that I’ve already experienced His best for me? Who is to say that’s all in the past? Not me. 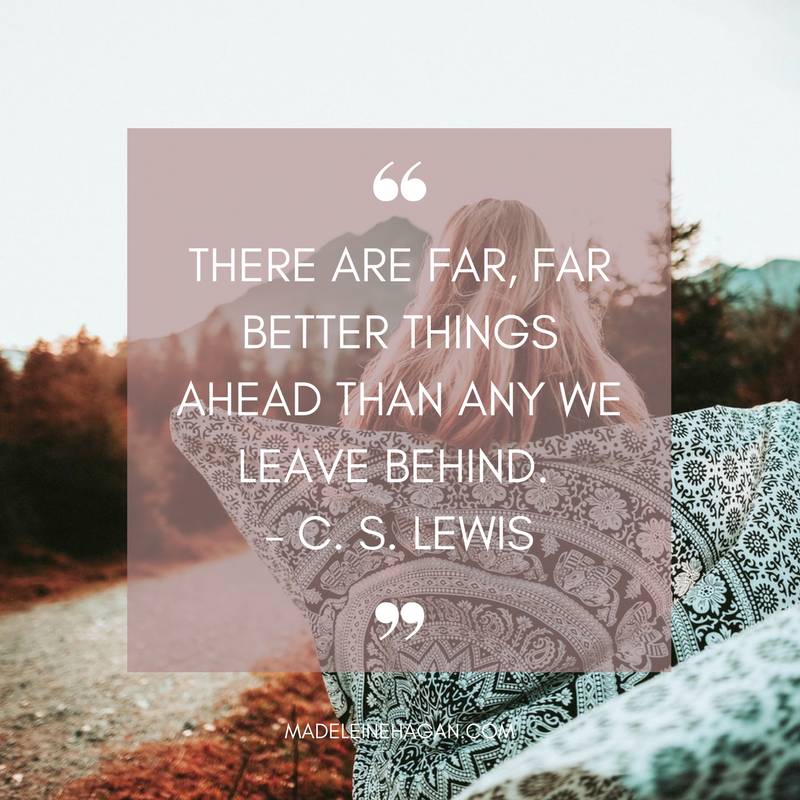 I’ve come to realize that His best for me yesterday is no match for His best for me today. He is generous and loves giving His children good gifts, and He has an imagination that is infinitely more creative than mine. I’m not about to put Him in a box, limiting what He can do in my life by saying, “Hey, remember last May? That was amazing. I wanna do that again and again and again.” I would miss out on His plans for the present.

“With God there are no cast-offs. There are also no favorites. There are only masterpieces. Every. Single. Time.” -Wild and Free

While I am thankful beyond words for the blessings He’s given me in the past, I don’t want to limit my ability to encounter new adventures by insisting He repeat the previous ones.

“See, I am doing a new thing! Now it springs up; do you not perceive it? I am making a way in the wilderness and streams in the wasteland.” -Isaiah 43:19 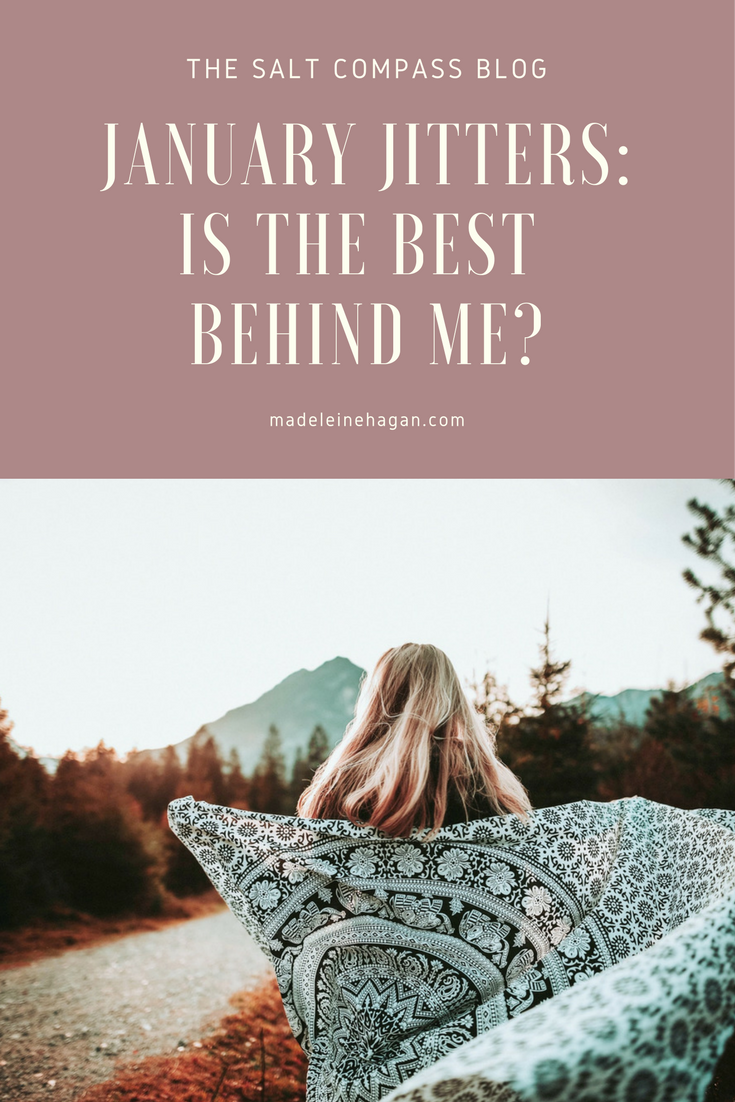 1 thought on “January Jitters: Is the Best Behind Me?”