So what does generous giving and miraculous living have in common? Moving out of the Thanksgiving season means Christmas time is here! At first, I thought the order of that was strange. The world seems to go from thinking about what they’re thankful for one day and by midnight that same day they’re ready to go buy everything they can get their hands on.

But actually, the order makes sense to me now. Because a Thankful heart is the only thing that can properly create a Generous one.

I think I forget that part. I forget that the next step after Thanksgiving is not a list of obligations that I label “Giving.” That’s the wrong mentality to have. And while the result on the outside is the same (the person receives a gift) what goes on inside of me is not necessarily practicing generosity.

And yet “Christmas is a time of giving” is practically sung from the rooftops everywhere that I go. The greatest gift of all, The Savior of the World, was given to mankind, making this a season of giving, right? That knowledge doesn’t escape me. But I watch the mad rush to the stores, the impatience at long lines and traffic, the arguing over sales prices, and the overall joy-less atmosphere doesn’t feel like the magical Christmas that this “Season of Giving” is supposed to be. 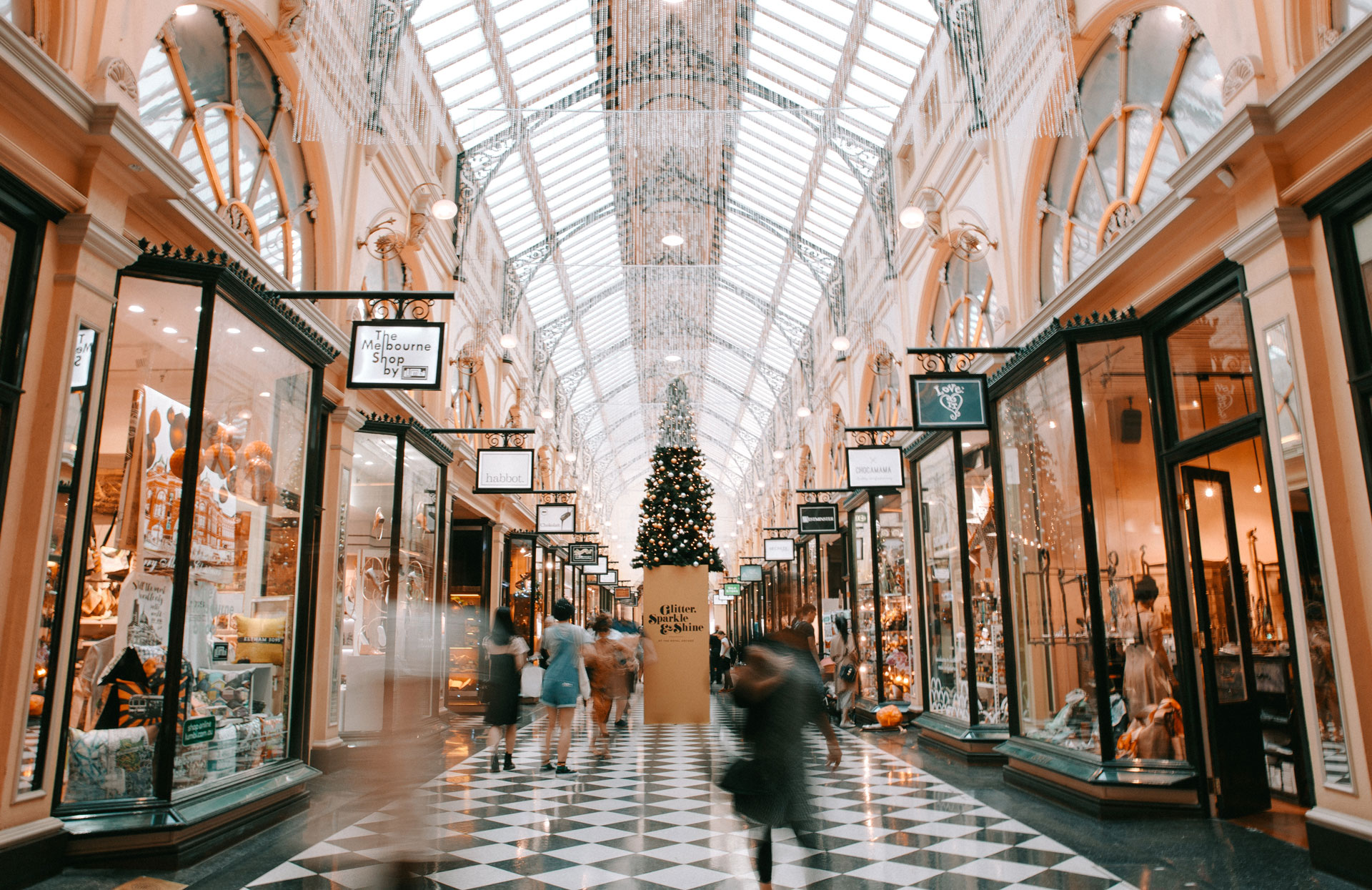 Instead, everything feels forced, insincere, rushed, and artificial. I look at the people who slap name stickers and pretty bows on generic gifts and then look at my own list and realize I’m doing the same thing, slapping smiles on my face and shallow words here and there in my rush to get back to things I need to get done.

Do I think Christmas is about giving? Absolutely.

But I think we are all too easily tricked into stopping there, rather than going one step further.

I think sometimes I fail to connect the dots between just “giving” and being generous. As a result, I’m not surprised when the miracle that is Christmas doesn’t feel all that miraculous, and I don’t find any additional signs of the miraculous at work in my life. 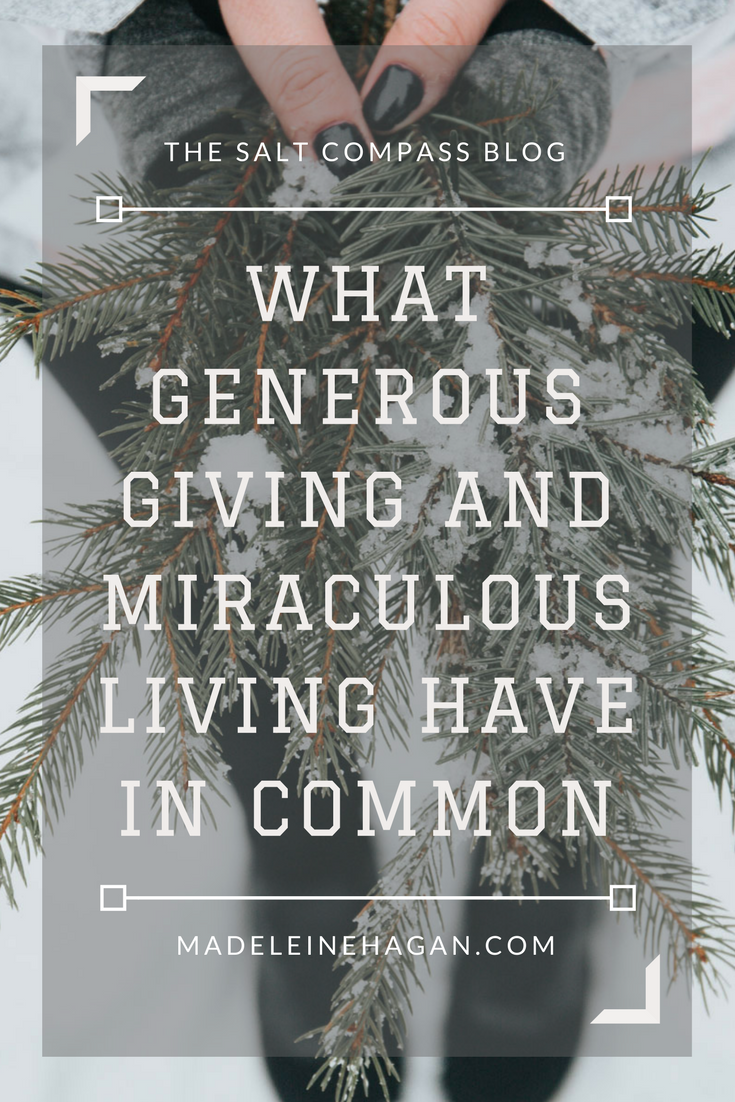 So how do I go about getting Jesus involved in the season celebrating His birth? How do I invite His miraculous nature to be present with me in the chaos that is making sure I don’t offend anyone by forgetting their gift? How do I look past the celebration to the miracle that went on behind the scenes? How do I make the connection between generous giving and miraculous living?

John 2 is the wedding at Cana. It’s a classic story that I’ve heard since I was a little kid because it was when Jesus performed His first miracle by turning water into wine.

I only recently discovered how much I love this story though, and there’s lots of different reasons why.

I love how Mary turns to Jesus when the wine ran out and tells Him about it like He didn’t already know.

I can see her smiling at Him like she’s part of an inside joke and saying, “So…they’re out of wine” as if He doesn’t know all things.

And I can see Him laughing and rolling His eyes lovingly like, “Mommm, I told you it’s not time yet.”

And we know the story. She calls some servants over, telling them to listen to whatever Jesus tells them, and He turns a lot of water into a lot of wine.

But I love another aspect too. It wasn’t a big, flashy miracle. In fact, verse 9 says that even the master of ceremonies didn’t know where the wine came from. But is says, “(Though, of course, the servants knew).”

No one else knew about the miracle except the servants who were involved.

Everyone else sees a wedding, a celebration with music and gifts and food. But the servants saw an enriched version with miraculous threads holding it together in the background.

I feel like I’ve been at that party many times, but not as a servant who took the Behind-the-Scenes Miraculous Edition tour.

What a day for them.

There arises a problem: a lack of wine.

And Jesus tells them to fill 6 stone water jars used for ceremonial washing with 20-30 gallons of water.

I can easily picture the servants raising their eyebrows at His instructions, looking at each other, and looking back at Jesus thinking, “Did He hear what we just said? We’re out of wine. What does water have to do with it?”

Side note: I wonder how many times I ask Jesus for a solution to my problem, and He points to something in the room, something I have in abundance, that I haven’t considered relevant.

I can also see the servants counting the minutes until they could get back to enjoying the fun parts of the celebration. Do they get to enjoy the laughter and the music at the moment? No. Mary summoned them to do whatever her son decided to tell them. But you know what? They might not have thought any of those things. They stayed, and they obeyed.

I know they were technically servants anyway, but they could’ve been doing a million other things at that moment that they probably thought would help the happy couple more. Instead, they were generous with their time and service, doing exactly what Jesus told them, even though it seemed irrelevant and weird. 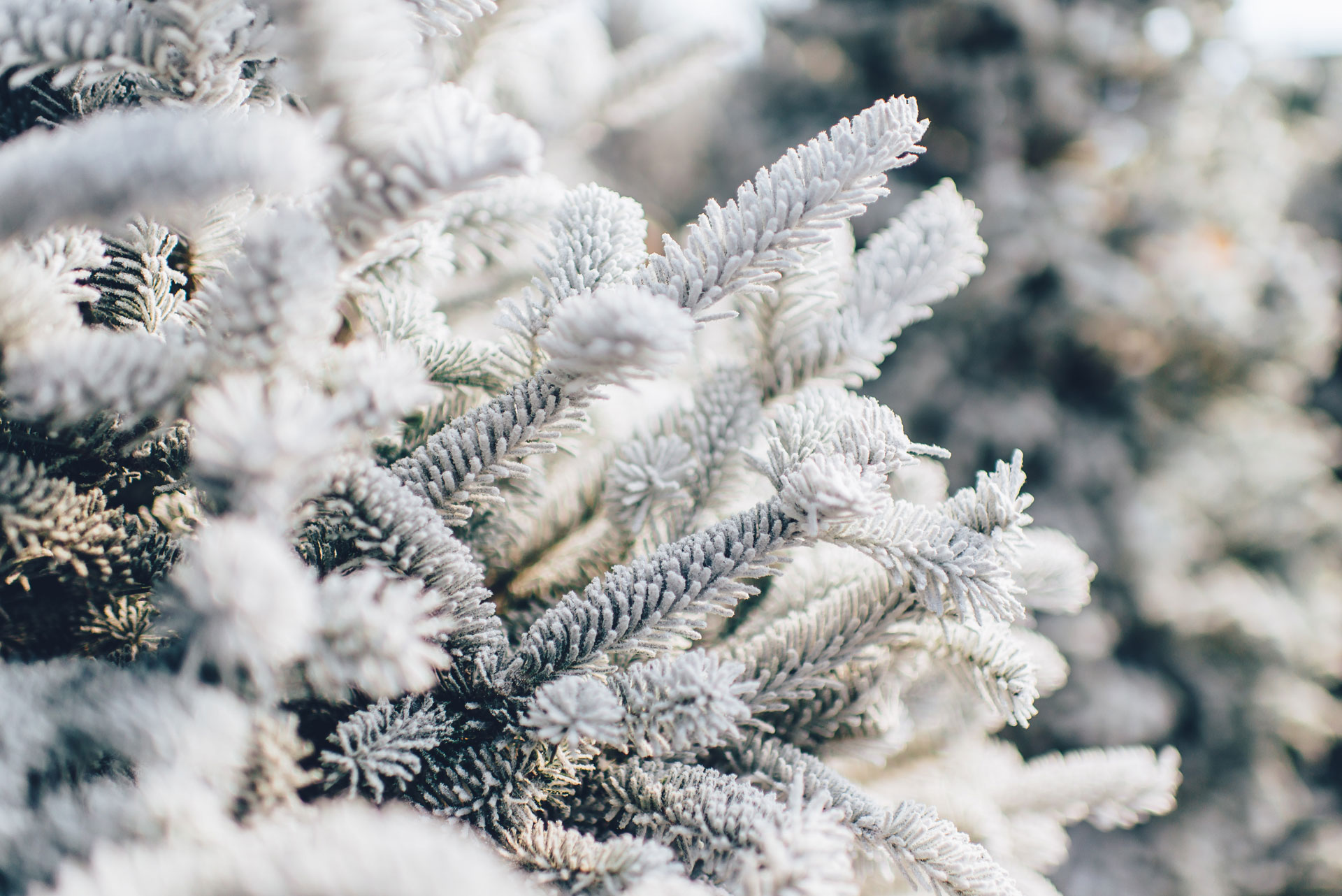 God doesn’t watch our acts of obedience with a smug smile on His face like, “About time. I deserve this.”

While He has every right to think that, I’m convinced He sees obedience as something else entirely.

I think God finds obedience combined with a heart of generosity irresistible.

Think about it. Maybe Jesus was invited to His friend’s wedding, and He was genuinely enjoying the couple’s happiness and the general celebration with no intention of drawing any of that attention toward Himself.

But then there’s a party crisis, and His mother knows Jesus can fix it, but that He doesn’t want the attention.

So what does she do? She gets servants involved.

And when servants get involved, Jesus gets involved.

Because a true act of service, with no motive for recognition or praise, tugs on the heartstrings of our God. It’s irresistible for His miraculous nature. He just has to show up. Because He delights to give good gifts to His children.

“If you then, being evil, know how to give good gifts to your children, how much more will your Father who is in heaven give what is good to those who ask Him!” Matthew 7:11

Plus, I think God loves when we are generous with our time, with our service, and with our grace because when we are we directly reflect His own generous nature.

The definition of generosity came from Him. We can never out-give God. And there is nothing that God cannot do through a generous heart that is willing to be obedient. 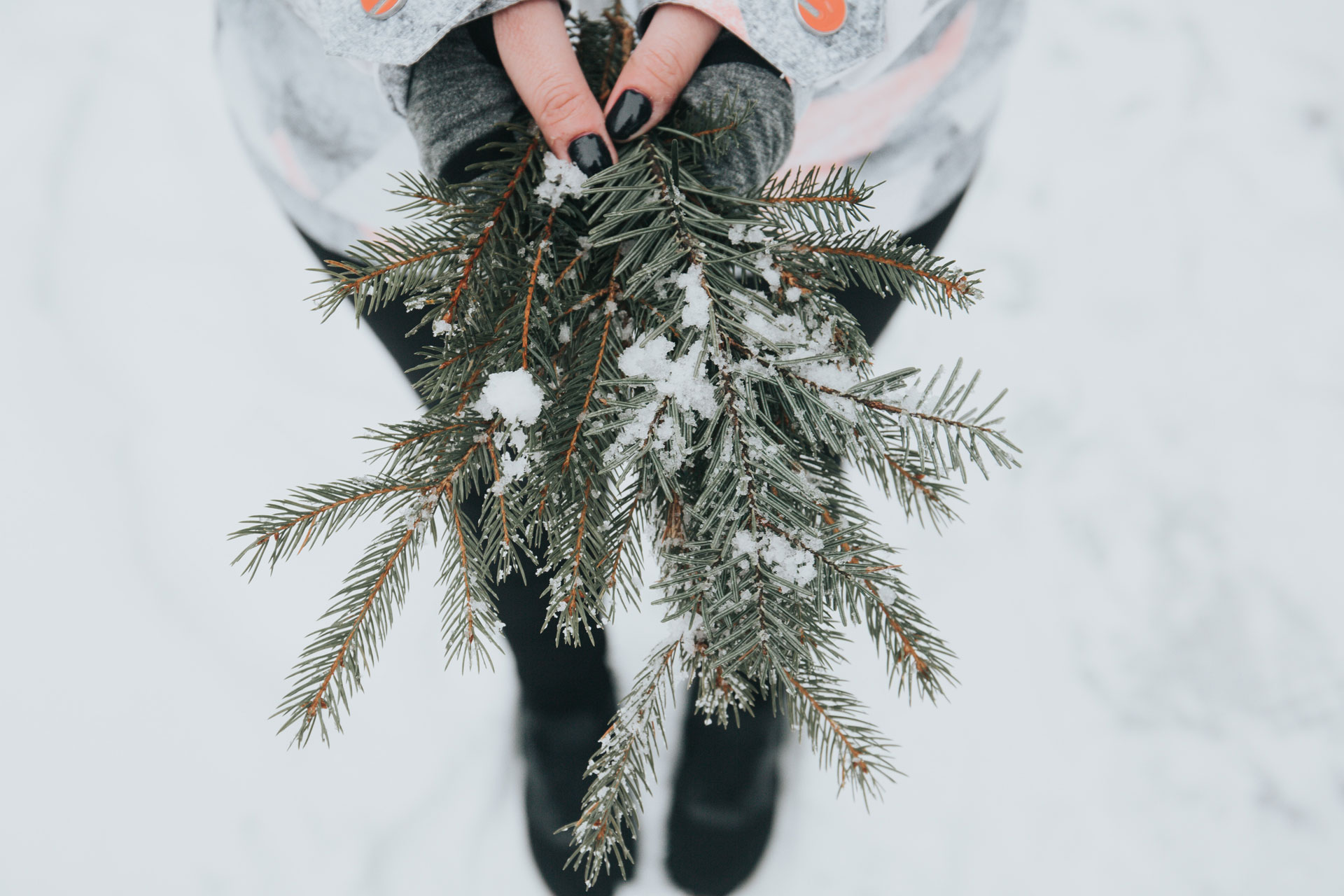 “Give, and you will receive. Your gift will return to you in full – pressed down, shaken together to make room for more, running over, and poured into your lap. The amount you give will determine the amount you get back.” Luke 6:38

Generosity by definition is not stingy. It doesn’t hold back. It doesn’t scrape by with the bare minimum. I think that is why I don’t see the number of miracles in my life that I wish to. Don’t get me wrong, giving gifts is a beautiful part of Christmas, and the more we can be selfless and give away for the benefit of others the better. I just know that sometimes I try to do that out of obligation rather than generosity. That’s why it’s sooo easy to let the Christmas season especially turn into how much stuff you can give without actually practicing generosity.

So many times I get wrapped up in my day and my to-do list, and all I have left to offer God is the “check list” kind of obedience. The kind that says, “Okay if I give Him 15 minutes of Bible reading in the evening that fulfills the obedience requirement.” And, “So what if I was grumpy at the slow waitress if I was there to get a Gift Card for my friend?” It’s the bare minimum mentality. Not a heart characterized by generosity that overflows into each aspect of my life.

Generosity is contagious like that. It won’t stay put in your heart. It will spread into your habits, your thought patterns, your emotions, and your actions. It gets us out of the bare minimum “survivalist” mentality and helps us see how abundant life can truly be when we align with the heart of God. It is those who are generous with Love, Joy, Peace, Patience, Kindness, Goodness, and Faithfulness that bring the spirit of Christmas everywhere they go. And I wouldn’t be surprised if they have their own stories about water turned to wine that the rest of the party is unaware of.

I want to challenge you (and me) to be those servants. The ones who are available, generous with their time and service, and willing to obey the exact words of Jesus. Because they are involved in a miracle that everyone else at the party misses. And if a heart of generosity and obedience welcomes Jesus to His own party, that’s the exact invitation I’m choosing. 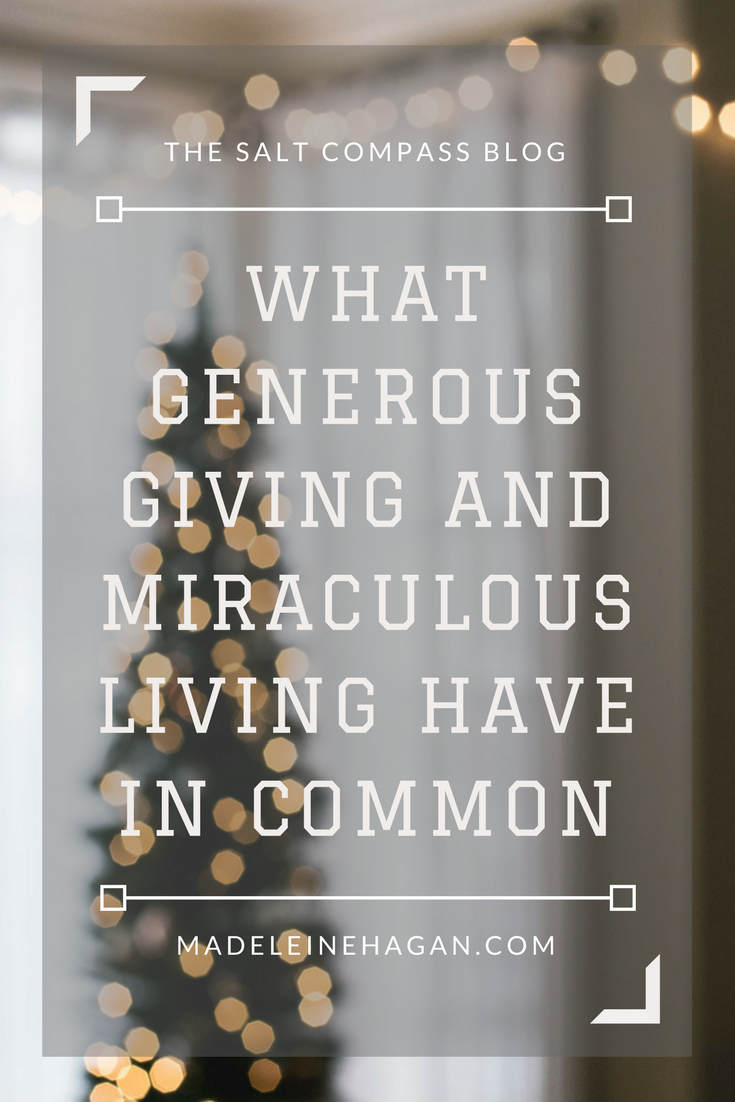