First of all disclaimer: I’m as guilty as the next person when it comes to liking compliments. It’s nice! Who doesn’t like it?

In theory, compliments are what a lot of people like collecting. We like the idea of people noticing something positive about us, whether that be a new haircut, a new outfit, or maybe even when someone notices something cool we’ve done and mentions it. That’s nice too. It makes us feel appreciated and noticed right?

The problem is, for many people the idea of getting praise or compliments is only liked for just that. The idea of it.

In the actual moment, this horrible thing can happen.

Did the person compliment something weird?

No. They said something perfectly normal and kind.

What makes it awkward, is the response.

There’s a stutter, a stumble, avoiding eye contact with the other person, and sometimes even the audacity to mumble “oh no way” in some wacko attempt at being humble.

I’ve been the one to give this crazy response, and I’ve watched tons of other people give this response more often than I can count.

So I’ve got a question or two.

If I liked the idea of getting a compliment, what is it I planned to do when I got one? Or two? Or five?

Because the whole “awkward standing there, not knowing what to say, and even worse, denying what they said, when it was a perfectly normal and kind thing to mention”, just doesn’t seem like what I had envisioned going on in my head.

So I delved a little deeper to figure out how to fix this, and here’s what I discovered.

How you respond to a compliment only reveals two things. Your insecurity, or your humble yet healthy self-esteem. 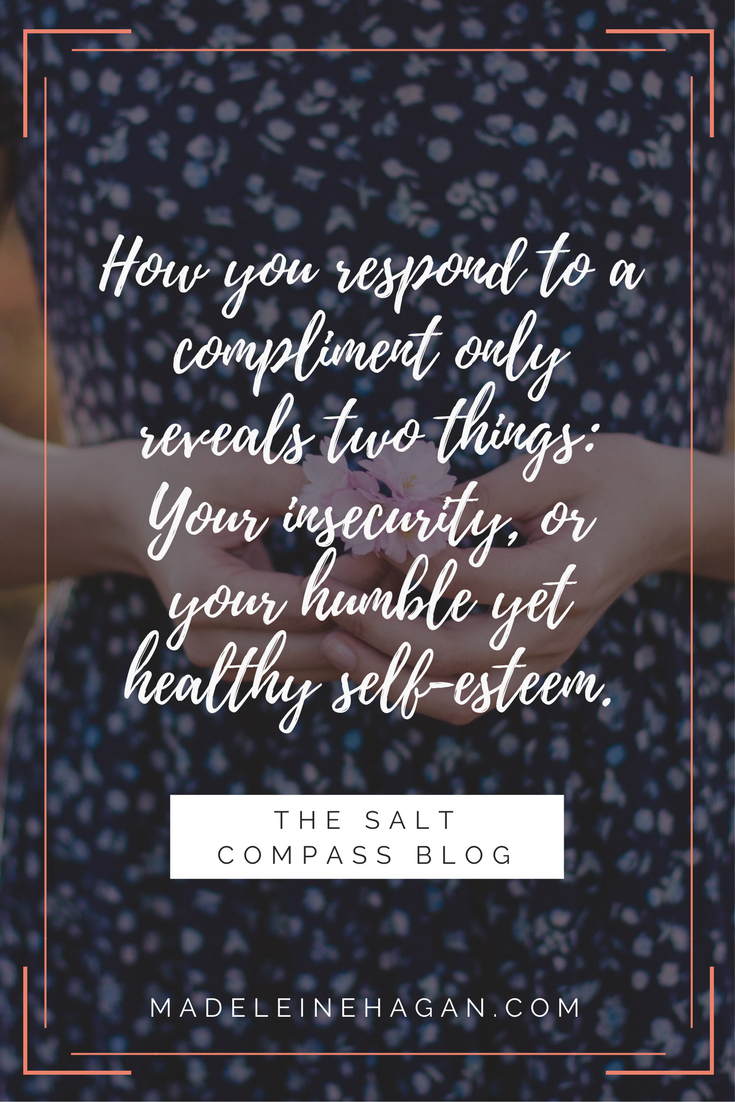 If a guy tells a girl that she’s beautiful, and the first thing she does is get all flustered and then say, “oh not really though” a whole bunch of things just happened.

First, a guy just kindly gave her a compliment that he in no way was required to give.

Second, she just made the entire situation about herself. She’s either selfishly fishing for another compliment, a “no really, you are gorgeous” or she’s just revealed how poorly she thinks of herself by refusing to accept it. That’s not humility y’all, that’s self-deprecation. It’s not a healthy character trait, and it was just dumped on the guy as if it’s his responsibility to somehow fix that.

Third, the poor guy now probably feels really awkward, not knowing how to react to such a response, and even might regret saying anything at all.

This whole thing is a crazy mess, and yes I’ve 100% been that girl who didn’t know what to do with a simple compliment and therefore reacted exactly like that.

It’s not just a girl thing though. Everyone has done this from time to time and I’ve seen guys repeat this exact same type of thing.

Someone commends a guy for the work they just did, or a skill that they’re really good at, and maybe the guy just shrugs it off.

“Nah it’s not really that great.”

And the person who (God-forbid) just gave them a compliment is left standing there like,

And it reveals the same two things. He’s either fishing for a second compliment, to contradict the words he just said, or he doesn’t believe it about himself so he won’t let anyone else think that either.

Does it make you want to say something nice to anyone who does that?

The end result is just awkwardness. And I’ll say it again, neither of these look like humility to anyone else, so if that is the goal, let’s just stop.

What I’d like to propose is an altogether simple solution that for some reason likes to slip our minds, but combined with a complete shift in perspective.

Hang on to your hats.

The same scenario is about to unfold. A guy is going to give a girl a compliment, but this conversation is going to be entirely different.

He tells her she’s beautiful.

And she smiles and says, “Thank you!”

Now hold on, I know some of you might pull a Regina George on this girl and think: “So you agree? You think you’re really pretty?”

What are you implying? That you want them to disagree with you on the very thing you just complimented them on? It’s really not any of our business to know if the person we’re complimenting has an arrogance issue.

A compliment is a gift, not an assessment tool for judging people.

AND that whole assumption is built on believing that she’s selfishly making the conversation all about her.

What if, and this is that crazy perspective shift, she smiles and says thank you because she’s thinking of the guy who complimented her instead of herself.

What if she’s thinking: “Wow. He didn’t have to say that. That was really nice.” So she smiles big, and thanks him.

And what if in the other scenario the same thing happens. When someone else compliments the guy’s skill or act of kindness, he looks them in the eye and says,

This way, the compliment giver isn’t punished for doing something nice. It’s an entire perspective shift, and I was completely stunned when I came across this way of thinking.

I thought that denying and rejecting compliments looked humble, because I was deflecting the praise from myself right? Nope. It actually kept the attention on me longer, and it doesn’t look humble. It really looks embarrassed and insecure more often than not.

I also thought that saying “thank you” for a compliment would make me look full of myself and sticking my nose in the air at them. Nope. It looks normal, healthy, and considerate to not throw the compliment back in the other person’s face.

I realized that I never want someone to feel bad for saying something kind to me. They chose to pause and speak aloud something nice that they could’ve just kept to themselves, and the last thing I want is to make them feel like they did something wrong or weird for it.

There are not enough people who point out the positive things about the people around them, and I never want to be the reason someone feels awkward for doing exactly that. 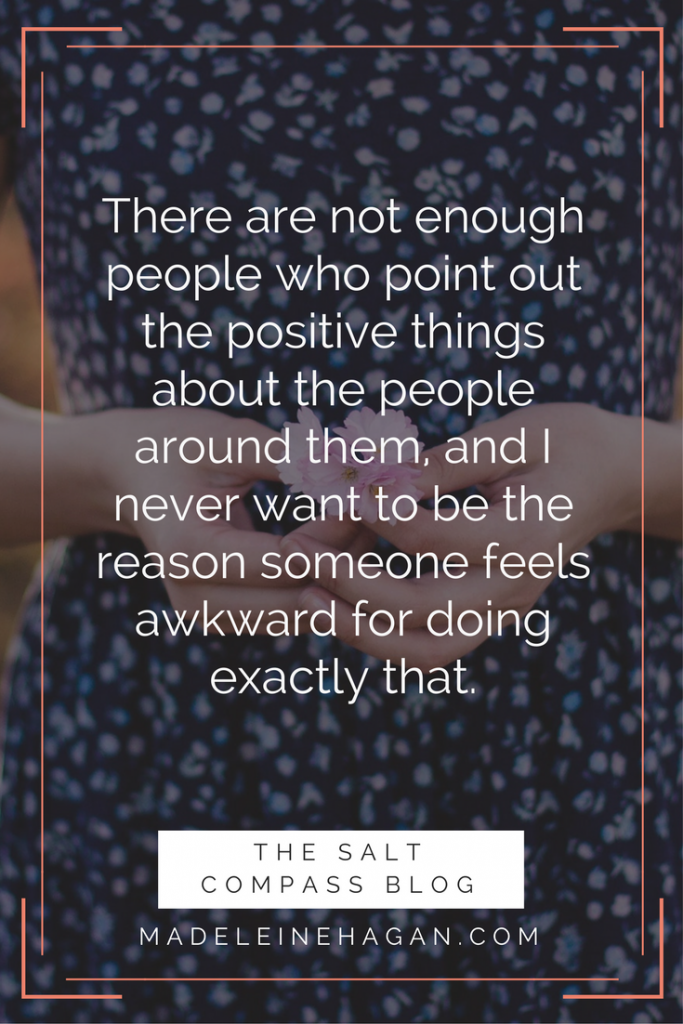 We need people who do that. Who aren’t afraid to spare a kind word here or a compliment there. Who build each other up instead of tearing each other down. Saying “thank you” acknowledges and appreciates that.

Not to mention girls, it makes you look confident in who you are. If that guy tells you you’re beautiful and you let yourself genuinely smile, his compliment becomes exponentially truer.

Of course, there are a billion other compliment scenarios, but the mentality isn’t really dependent on the words. My sister can say, “You look great in orange” or “You’re great at bowling” which in my opinion are about the most inaccurate assessments of whatever inspired those comments. However, giving her a smile and a chuckle and a “thank you” might have her realizing I disagree, but that I still appreciated the sentiment. That her kindness was noted and that I’m grateful.

So I suppose I’m just presenting a perspective shift. Perhaps we should focus more on being compliment givers than compliment fishers. And if I wouldn’t want someone throwing a kind word back in my face, perhaps I shouldn’t respond that way when others do.

Take the compliment. It’s a challenge at first if it’s not a habit. But if you practice, you might just be surprised how much easier it gets. 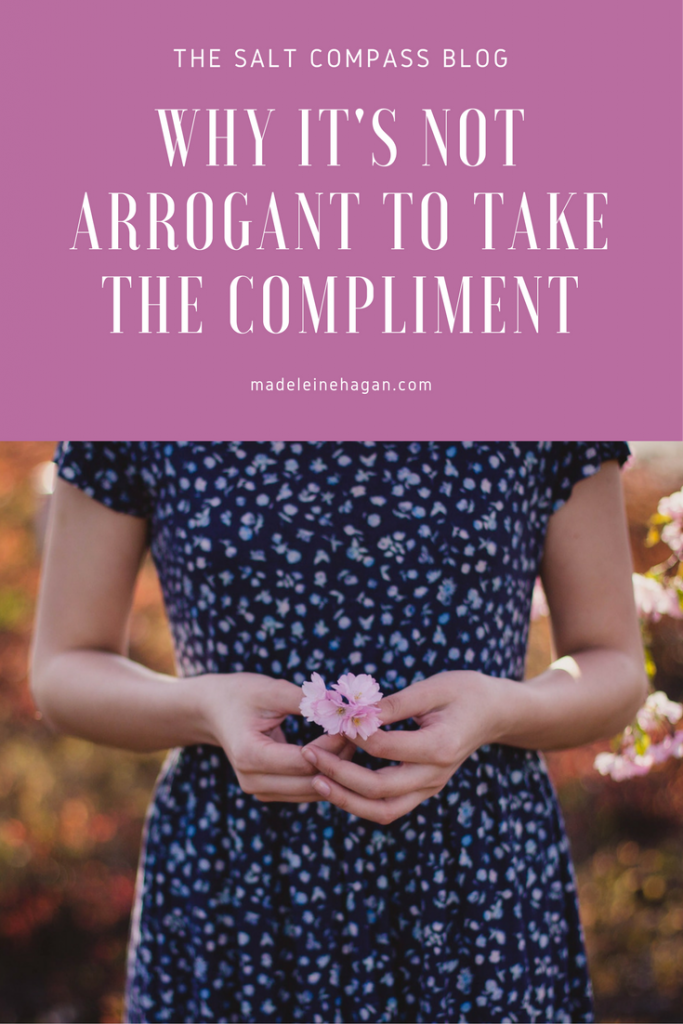