Be careful asking God for more, because He will always deliver.

I think God has worked on me in stages, as He normally does, but in much larger stages than usual at the start of my college years because I finally asked for more, discontent with the level I was experiencing His presence in my life.

After asking this of Him a couple years ago, He caught me living in the identity I’d accepted as truth many years before. I eventually learned I’d actually have to surrender that identity before I could accept the new one He’d give me. (Say whaaaat?)

Because God has been trying to get a different thought to remain a truth, a grounded truth, in my head: He wants me.

And so we started dissecting that phrase backwards and forwards together.

I got to learn more about who He is and realized I had a lot of misconceptions about His character that affected my thought life with Him and my behavior. But I learned more of His names, names that He wanted me to call Him. I got to experience power in His presence more than I ever had before. He was a Lord worth serving, and worshipping and loving. On His own. Without me, or what He’s done for me in the picture at all. He is worthy of all my praise just because of who He is.

But, as God does, He chose to include me in the picture. His picture.

Because He wants me, He explained again.

In fact, I had to surrender my past in general. Including mistakes and triumphs. Embarrassments and accomplishments. Other hiding places and refuges that weren’t Him. He showed me that He’s seen everything I’ve ever said, done, felt, and believed. Good, bad, and ugly. And still loves me. And still chooses me.

And still wants me, He added again.

But not only did He want my past, He wanted my present.

I got to lay down the person I’d become and trade it for the person He said I was. And I had never felt so free.

Not only did He get rid of past identities, He replaced them with new names. Identities I don’t have to perform to keep. Names that He gave me as I am, present tense. Well, really eternal tense.

One of my friends has recently written about this beautifully on her blog , saying: “She doesn’t have to do anything to be loved, she just is. She has so much potential in her finger tips to change the world for God’s sake, but until this day comes, she is still His beloved. She is enough just by being still.”

Because He wants me, the note addressed to me said again.

Not just for what I can do for Him, and not just because He wanted to fix broken parts of me, but because He is delighted in who I am. And that me, that one He intentionally made, and was introducing me to, He wants involved. Present tense.

So together He showed me how even in day to day life, my minutes on earth can count for something eternal. That I don’t have to wait until someone important says I’m qualified. That I don’t have to wait until I’ve gone a certain amount of days without messing up. That I’m not small or too insignificant in the world to do anything that could matter.

That I’m on mission now, should I choose to accept it. He has gear and weapons at the ready and He will pass on His Kingdom flag for me to advance if I will take it and march forward with Him.

But not only did He want my past and present tense.

You know where I’m going with this.

He showed me that only I have the power to let my past creep into my present, or otherwise.

That only I have the ability to choose to be fully present in the assignments He’s given me today, or otherwise.

But that’s not all I am is it?

Surrender of all of me is an intense “three-tense” ordeal.

He wanted my future too.

A future I had just started to daydream about. A future of hopes, dreams, and joy. I had created this vision in my mind and I fell in love with it. It was the ideal, the goal.

And recently we had a conversation and He said, “That too.”

Because it was me.

And He wants me.

All of my potential.

All of my usefulness.

All of my work.

All of my productivity.

All of my skills and strengths.

Yes, these are all well and good because they’re easy. I like the idea of offering Him my strengths. The things I’ve figured out how to be good at and do well for Him.

But He also wants all that I don’t offer Him freely.

Like my fears, my doubts, my most embarrassing “I-wanna-go-up-in-flames-right-now” moments. My failures and mistakes.

My joys. The things I go to that I know will make me smile every time.

And perhaps the hardest things, my hopes. My deepest wants. What I will tirelessly strive to grasp.

These hopes, they are valuable and fragile because they’re rooted deep, deep within me, and oftentimes I trust no one to get near them except me. Including the God I claim to trust. As if my hands are safer for my heart than His.

He wants them anyway. My future. My highest hopes for that future and all the dreams within them.

He wants the terror and the pain that comes with potentially letting go of those hopes.

The trembling, the crying, the stubbornness that tries to reign as two tiny hands uncurl their fingers from fists and say, “You can have them. You can take them.” Gritted teeth and all.

Palms up and open.

He wants me, right there, in that place, palms up and open.

But not as a temporary moment of surrender.

He wants to teach me how to live there.

He extends His own hands, palms up and open, underneath my tiny ones, to steady and reassure. That He is not going to leave me alone in this place. That He is as good as I remember Him to be.

Normally when you love someone you trust them enough to place valuable things in their hands. And He values our relationship enough to know that if I withhold what I value most from Him, we won’t be as close as we can be.

And I watch my hands resting there, open and ready, and realize it is better this way. Not clutching everything so tight. Cause I’ll run out of room carrying it all in my fingers. I’ll run out of space in my life for the things that could make it really living.

But with His hands underneath mine, the possibilities are so much greater. And I would rather have one gift, roam from His hand to mine, only to wander off again later, instead of clutching too tightly to hopes of my own creation that fall so so short of what He has in mind.

My goal had to be redirected.

To live in that state, palms up and open, for every tense of my life, every day.
It has to be daily.

Sometimes a past identity tries to worm its way into my mind and dictate my decisions. Sometimes in the present I feel too unqualified, too stressed out, and too insignificant or powerless to be of any use in His mission.

And sometimes I grip my hopes for the future tighter than my need for His presence within them.

Daily I must surrender all of me.

Daily I must abandon my survivalist mentality (trying to sort it out on my own), lay down my arms and my pride as He tries to show me a better way, and rejoin the team I belong on.

A team where I do not have to be self-sufficient, perfect, or put together to belong.
Open hands in the palms of my Father.

A brave character in The Chronicles of Narnia approaches the Great Lion after meeting Him and profoundly admits, “I would rather be eaten by you than fed by anyone else.”

I want to live there. Where I can feel the fear flood my veins, and do it anyway. Knowing that it’s better to abandon it all if He said the word, to redirect my ambitions and hopes and goals, rather than build it all myself only to find it wasn’t fulfilling as His very best for me.

I have to believe that He wants me. All of me. Not just what’s pretty enough to post on Instagram. And that once He has me the things that fall away were what was harming me rather than keeping me alive.

“Your unfailing love is better than life itself; how I praise you!” -Psalm 63:3 (NLT)

He is our sustainer, provider, and King. And as I face another day of watching what falls into my hands, I’m learning to breathe to a new rhythm. A rhythm of peace, knowing that my life is authored by someone who knows exactly what He’s doing. And if I continue to trust, I can rest knowing that whatever comes into my little hands, I really don’t want it unless He wants it for me. 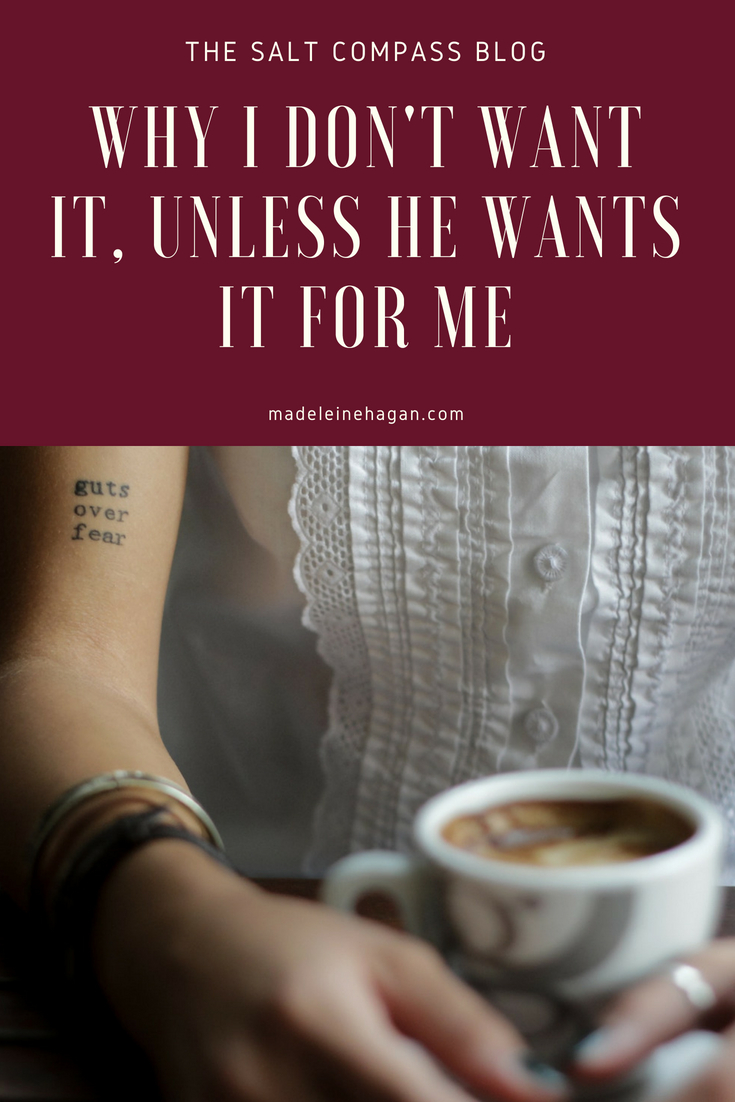 2 thoughts on “Why I Don’t Want It, Unless He Wants It For Me”