First blog post as I am back in the States for the summer! Woot woot! *happy dance*

May I just say, that the weather is absolutely lovely here in Western North Carolina. My absolute favorite place at home is the back porch that overlooks the back yard and surrounding mountains. In the morning if I can time it right, I can catch the fog retreating back away from our property, revealing trees at the edges as well as pastures and hills full of wavy grass that the wind sends ripples through in the afternoon. I could and have spent many a day just sitting on this porch, whether it be reading or writing. In the afternoons the spot I claim on the porch is completely shaded. Sometimes it rains, and sometimes not, and either is lovely with the cool breeze that whispers its way through the valley. The only things that attempt to trouble me from time to time are the fuzzy carpenter bees that smack into the screen angrily and buzz in protest at the small square of porch they don’t have the liberty to burrow into.

If I wasn’t deathly terrified of all bugs of absolutely all kinds, I’d be able to giggle at the stubbornness of the bees. Every day without fail, at least three try to angrily bump their way through the screen, and while they of course fail every time, they make such a buzzing fuss that anyone on the porch at the time turns to look at the frustrated and very confused (and somewhat chubby) bee. I almost giggle. C’mon bee. You’ve got the rest of the porch (which you are quite good at terrorizing by buzzing around mere inches from the heads of all who choose to sit in the any of the chairs there), the rest of the yard, the rest of the valley even, as well as the surrounding mountains, and you choose to fly face first into the section of the porch that you obviously aren’t allowed and can’t get into. Some of them even hit the screen so hard that they float there suspended in mid-air for a second as if from shock before resuming their stubborn buzzing strategy.

Cause while I shriek like I’m being murdered if a bee or fuzzy, flying, stinging bug of any kind manages to find some way through the screen, my Dad comes outside with a tennis racket, and if they don’t make a quick escape it’s the bees that are sent to fuzzy bug heaven. The screen is for their protection too, not just mine. *evil cackle from where I sit with my fluffy socks* (Bees, don’t take that personally. You’re just very creepy and you need to mind my personal space.)

In the same way though, I can understand the draw. There’s something irresistible about seeing something with barriers around it and wanting to take them down. There’s something that captures the curious mind when a rule or command is given that appears to be strange. And there’s something incredibly human in the response to those that involves hitting our heads against the rules or the barriers until we figure out why. 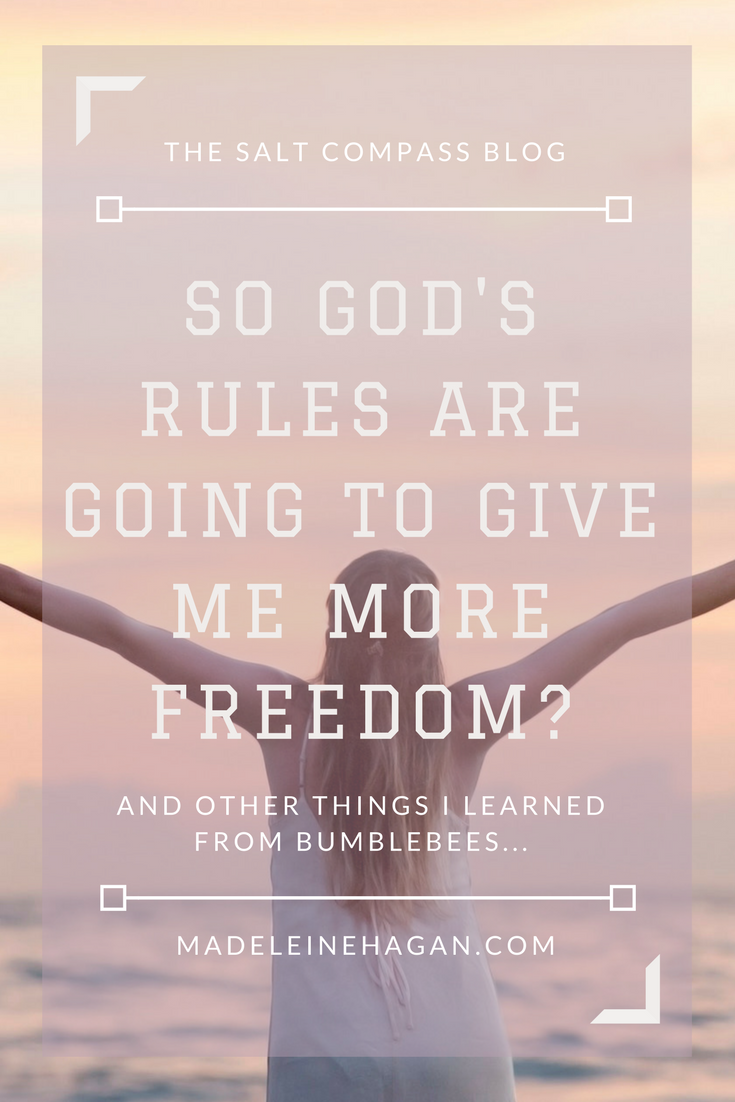 But as the bees have been figuring out, sometimes the little holes in the screen don’t get any bigger no matter how many times you hit your face against them. Sometimes the rules don’t change or reveal exceptions no matter how many times you wish they would. And sometimes the explanation for why they are there doesn’t become any clearer when all you can see is the screen and not the porch it’s protecting. And rules are no different. The explanations are harder to see when all you’ve been focusing on is the rule and not the promise the rule protects.

“Don’t ever take a fence down until you know why it was put up.”

Rules and barriers can also serve a purpose until a certain time. I remember throwing temper tantrums at the age of 6 because I couldn’t have something to eat right at 4:30, exactly when I wanted it, not knowing my parents were trying to keep me from spoiling my appetite for dinner. On the rare occasions I could manage to sneak a snack anyway, the reason the rule was there in the first place proved it necessary. I wasn’t hungry for the dinner that was ready only two hours later, which ended up looking a hundred times better than the snack had looked at 4:00. And I missed it, by focusing too much on the rule itself rather than what was promised later in its own time by people who cared about me.

I wish I could say I’ve fully grown out of that habit. But I’m starting to wonder if it’s part of being human (or maybe I’m secretly still 6 – shhhhhh).

Eve continued to listen to someone who lied about God’s character. Her Creator, who she had no reason to doubt. Yet she did doubt, which is what I believe was the original sin. She doubted the character of God, who she knew Him to be, and that He wanted the absolute best for her. And the outward display of her doubt, the symptom proving the disease, was made clear in her disobedience.

I think it’s all too easy for many Christian’s to blame her specifically for her fall. For her mistake.

Really Eve? The one tree? The only rule God ever gave you and you just had to go and break it?

I’ll admit I’ve thought that a few times myself. Like surely if I got to walk in the perfect garden in the cool of the day with God himself and the man He created me to be with, and knowing He said, “It’s all yours, and you can eat from any of it. Oh, just not the tree in the middle of the garden.” Wouldn’t I simply think that was beyond fair and enjoy the rest of the garden?

No, I know I would’ve done the same thing she did. Because I continue to still.

Day after day, I slam face first into rules that don’t make sense to me, hoping that they will budge or somehow make an exception for me, because I don’t realize that they’re trying to protect me rather than restrain or hurt me. I get stuck in my mind, wrestling over my doubts from one of God’s rules or commands, instead of trusting the heart and character I know Him to have.

But she was being really nasty, do I really have to respond lovingly?

The rule clearly says so. And yeah I sit there knowing that it’s because it’s the “right” thing to do. But do I stop to think about why? Lashing out in an angry response would only hurt the person I speak to, as well as damage me.

“Bones, like the laws of the spirit, intended to liberate us, only enslave us when broken.”

– Fearfully and Wonderfully Made by Dr. Paul Brand and Phillip Yancey

Rules, (dare I say it?) can be healthy to obey.

When God says, “Love your enemies, and pray for those who persecute you,” He does not say this to be mean. He doesn’t purposefully invent it because He knows it will be difficult. It’s because He knows it’s the best thing for us and the people around us. In this way we can speak words of life rather than death into the lives of those we interact with, and we simultaneously deny the enemy yet another thing to add to what he could use as a discouraging track record against us. Not to mention we’re also representing God’s love, mercy, and kindness when we react this way as well.

And that’s just one example.

God is love. And the rules He gives us should be translated no differently. Whether it be unhealthy for us physically or spiritually, or just not the right time, when God says no, we should assume He says so with the loving heart of a father to his beloved child, and not a “Steal-your-fun-and-zap-you-with-a-lightning-bolt-when-you-misbehave” look in His eyes. Just a thought.

As for me, I’m going to keep reading and writing on my porch and empathizing with bees. And well, trying not to bumble around quite like them.