TRAVEL POST: I haven’t done one of these in a while! I figured it was about time.

The three musketeers took Brighton twice in the past few weeks. The first time Viki, Rosalind, and I got to accompany the Krycler’s to Brighton for the day on May 8th. It was pretty incredible as it was the warmest it’d been in England while I’ve been there (in the high 60s Fahrenheit). 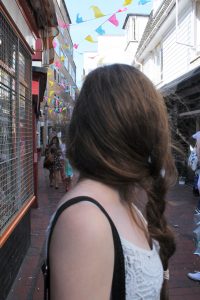 Summer outfits came out and I would’ve even worn flip flops or sandals of some sort if I hadn’t left them all in America. We sang along to Taylor Swift the entire way to Brighton, which was about an hour and a half drive from Portsmouth, and decided to explore the Lanes first.

Pink, blue, and yellow flags zig-zag across the tops of the buildings, while tons of people wander the unique shops on winding cobblestone streets. From bohemian apparel and accessories to chocolate shops called Choccywoccydoodah and live performances by talented singers and entertainers in the streets, there’s plenty to explore in Brighton’s Lanes.

After milkshakes later in the afternoon we headed to Brighton Pier where we rode rollercoasters and water rides and tried to avoid being underneath all the seagulls for the remainder of the day. The sun went down as we were about to leave as well, so we got some lovely sunset pictures.

Since we loved the day so much, we were planning our next visit before we even made it back to the car to leave. I was headed back to America the following Thursday, so we knew we had to come back before then, and we wanted to stay just a little bit longer. We looked up hotels the next day and spontaneously booked the upcoming Monday evening to stay overnight.

Monday finally rolled around, and we got the train back to Brighton. The weather was even beautiful again and I was able to use sunglasses (a rare occasion in England).

We made our way to the hotel we booked down by the seafront, but had to stop a few times along the way. Rosalind led us to a macaroon shop where I tried a macaroon for the first time. Sea salted caramel. Absolutely amazing. The coffee cake flavored one was really good as well.

We ditched our bags at the hotel and ran out the door again to make the most of the afternoon disappearing all too quickly. Back in the Lanes once again, we continued wandering around the lanes looking in old book shops and a few favorites from the previous Sunday until we found an adorable coffee/cake shop called Cloud Nine. Vanilla cappuccinos as well as oreo, banana toffee, and white chocolate cupcakes were very necessary, and we stayed until closing when we decided that going back to the hotel and getting ready for dinner would probably be best.

We ended up deciding to have dinner in the Aberdeen Steak House, about a three-minute walk from the hotel we were staying at, and I must say that was one of the best decisions of the entire trip. Each of us got different steaks and all of it was absolutely fantastic. I personally loved the mountain of fries that was plopped in the center of the table. We also met the owner/chef and tried to convince him that opening a restaurant in Portsmouth should be his next project since the food was just that good. The evening was full of laughter and the chocolate ice cream was incredible. I highly recommend a visit to this gem if you ever get the chance.

Pancakes were provided the following morning and then we headed back to the train station where we waved Brighton goodbye. I definitely wish we could’ve stayed longer, but I guess I’ll just use that as my excuse to come back yet again.

3 thoughts on “Trip to Brighton”