So I’d been back home in North Carolina for a few days when I finally did it. The idea of coloring my hair had been in the back of my mind for maybe a few years now and that fact had started to bug me a little. Why couldn’t I just do it?

There had been all sorts of excuses I always made to avoid it. It would be more high maintenance, it would be artificial (even though what I wanted was a natural dark brown), and I liked being able to say I had never done anything to my hair other than trim it.

But there were reasons I wanted to as well. I thought the dark brown would look better with my light skin tone instead of the dark blonde I have naturally, and I wanted to try something a little different without going completely crazy. But these never seemed to be “good enough” reasons.

And I debated back and forth for over a year. Everyone I already knew would know it wasn’t my natural color, which I thought would bug me a bit. And what did it mean that I wasn’t satisfied with the way my hair already was? Shouldn’t I be? 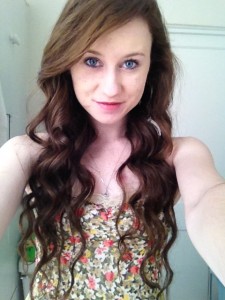 But only a few days after I came home I just decided to quit over-thinking it for one simple reason: I was intimidated by the idea. And I was tired of that. The kind I was going to try was going to wash out in a few weeks anyway, so what was the big deal? I had made a simple idea way more complicated than it needed to be and had settled for silly excuses rather than try something new.

And I just wasn’t going to have that.

It’s a simple thing really, I know. But it was on the list of “Things To Do Eventually” and I mean why not right? Plus it was a Wednesday, and I think that’s a perfect reason to put aside lame excuses and try something new. If it didn’t work then six weeks later it’d be long gone anyway, and I’d move right along.

I highly recommend this perspective once in a while. I wonder how many other times I miss amazing and fun things simply because I’m too intimidated to try them, and then before I know it I can look back on two years of overthinking one simple idea. Sometimes you don’t need to wait for a “good enough” reason. Sometimes it can simply be because it’s Wednesday.