It’s one of those days. The words aren’t coming easy. You’re trying to find them, but they are falling into flat, pasty sentences that taste like cardboard and translate poorly. You can’t see them mattering.

You have read so many stories from so many talented writers. You’ve soaked up their words with all the awe and wonder that comes with, “Aha! See?! I’m not alone. Someone knows what that felt like.”

But later you also think, “They’ve already nailed it. How could I say it any better? What’s the point in trying to sketch a snapshot of what this human day consisted of when they’ve created a masterpiece?” A breathing 3D painting that is almost clearer than the very thing inside you that demands you try to sketch it anyway.

It makes you feel small.

It makes you feel redundant.

It makes you feel like an echo that’s already faded so far from the original call that no one remembers what it was saying at the start.

I don’t have a formula, a step-by-step process, to get you back to catching the overflow of creativity you sometimes can’t contain.

Those train journey conversations are their own kind of good. They take you somewhere. But I’m not presenting a one-way ticket from the heaviness that you currently carry to the solution that will make it evaporate again.

This is a rocking chair conversation. Not stuck. Not progressing. Not sinking or rising. You are treading water. Creasing the floor, back and forth, over each of the whispers that come across your mind. A long soak.

Sometimes this is how it is.

You’re worried about redundancy. Here’s the thing: Those wonderfully talented writers? What a gift they are. You recognize that. Redundant didn’t even cross your mind as you read their words.

Yet how could you be a copy? They haven’t laced up your shoes, let alone walked in them. They haven’t hugged the same people you have. They haven’t collected all the same stories you’ve gathered and shelved in the well-dusted corners of your memory.

But there are some who have witnessed your walking and your collecting, and they are waiting to see what beauty you can create with them.

It is your design after all. To create.

When you craft sentences over and over with precision and long hours, it brings your Maker joy. He loves that you saw something, felt something, caught some kind of tremor in the strings of your heart, and you spotlighted it on your messy, uneven lines several days later. Even if you tear up every page you’ve written, He loves that you wrote.

You can feel that too on the best days. Like receiving a proud smile from across the room that no one else notices. You beam.

There are others who love your words too, and you are grateful when they take the time to tell you so. But on the heavier days you are wondering, “Would they think I was so talented if they saw me on days like this? When I’m avoiding my computer because the words won’t come. Would they still praise the skill of stringing words together if they knew that between the start and the finish my fingers got tired and sore and frustrated?”

You hear an ugly sentence in your mind.

If you were as talented as they tell you, it wouldn’t be so hard.

You wonder. But there’s no need to.

Let’s crease that into the floor under the weight of all this rocking.

It’s okay to admit that it isn’t effortless for you.

“A writer is someone for whom writing is more difficult than it is for other people.”

You are not a forgery of an artist because the process is difficult. The presence of struggle doesn’t imply the absence of grace and gifting. 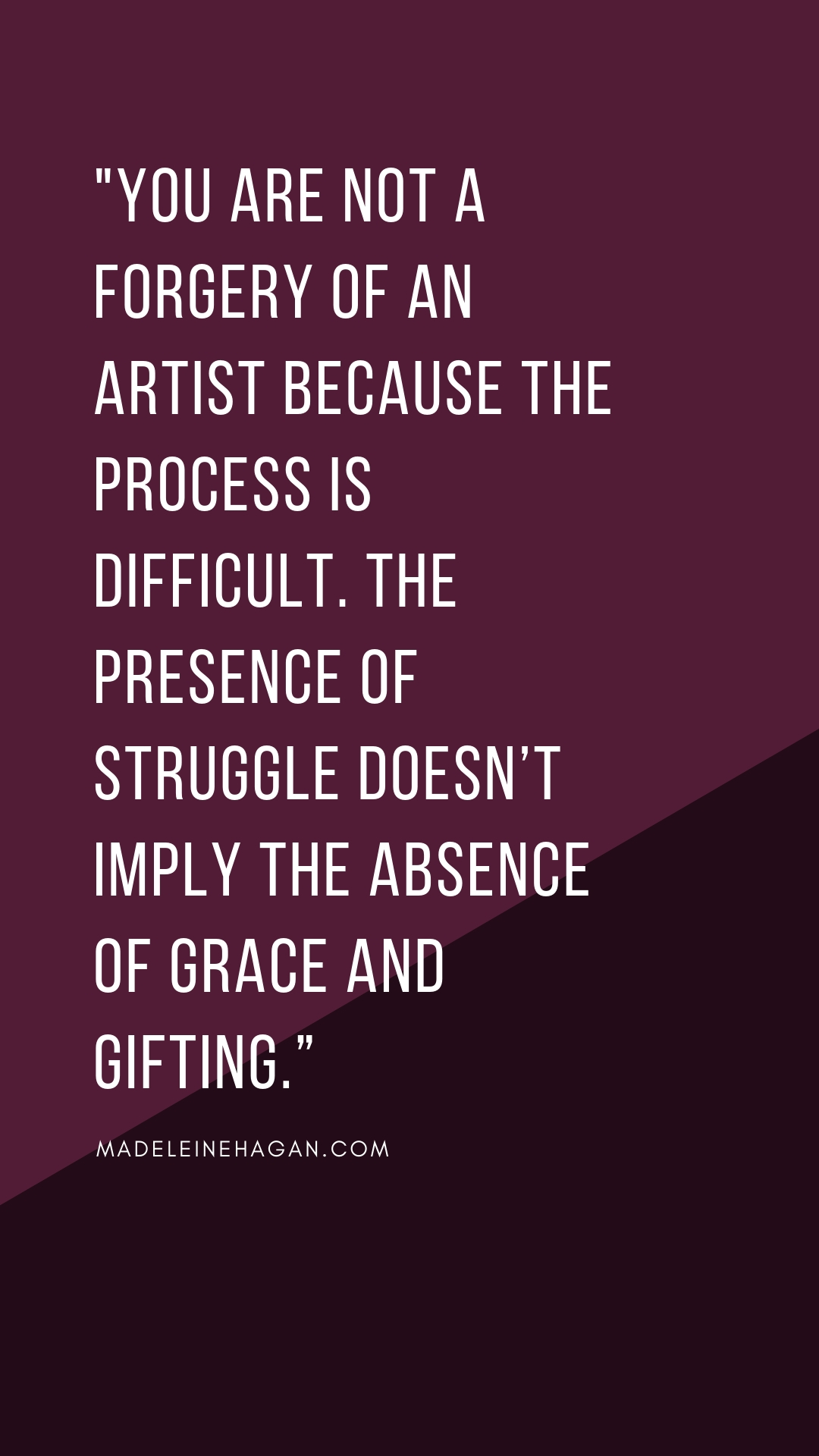 You do not witness the struggles of the creators you admire, but that doesn’t make them nonexistent. Knowing their process would not lessen the impact their words had on you. If anything, you might even appreciate them more.

In the end, why compare at all?

The excuse that someone else has already done it (or done it “better”) is irrelevant. Such connections are not meant to be drawn. If you do not let other people’s adventurous lives convince you not to live your own, then you should not let other people’s stories convince you not to tell your own. If anything, it should motivate you even more because now you know for sure it’s possible.

Just because you struggle, doesn’t mean you should stop.

What if the words that someone desperately needs have not been read by their eyes because you have not typed it with your hands?

What if someone felt a similar tremor? But couldn’t craft it in words like you managed to do? What if it points them toward North when they needed it most? What if they are the ones soaking up your words and saying, “Aha! See?! I’m not alone. Someone knows what that felt like!”

It is one of the greatest privileges. When you, the middle-man, are almost invisible, and they can grasp the gold you’re holding out.

Isn’t the potential for that worth the waiting and the frustration and the doubting and the wincing at the twisting? It’s significant, yet anonymous. And how freeing that is.

What if that person is you?

That alone is enough. It’s okay to admit that you need to get the words out, and that you feel lazy, swollen, and stiff when you don’t. Wrestle with your words until you force them onto paper. Like you wrestle to outrun the treadmill’s miles every other day. Not because you think you can reach them all, but because you know that chasing down one sentence more makes you better in the process.

You’re a paper processor. You always have been. While you can think and feel a hundred things at once, the page insists on listing just one at a time. It’s okay to organize in this way. The page is not intimidated by your honesty.

Trust me, though, the words were on their way, and when they arrived, Liesel would hold them in her hands like the clouds, and she would wring them out like rain.”

Even when your vocabulary dries up, and you’re left with words all un-glamorous and simple. 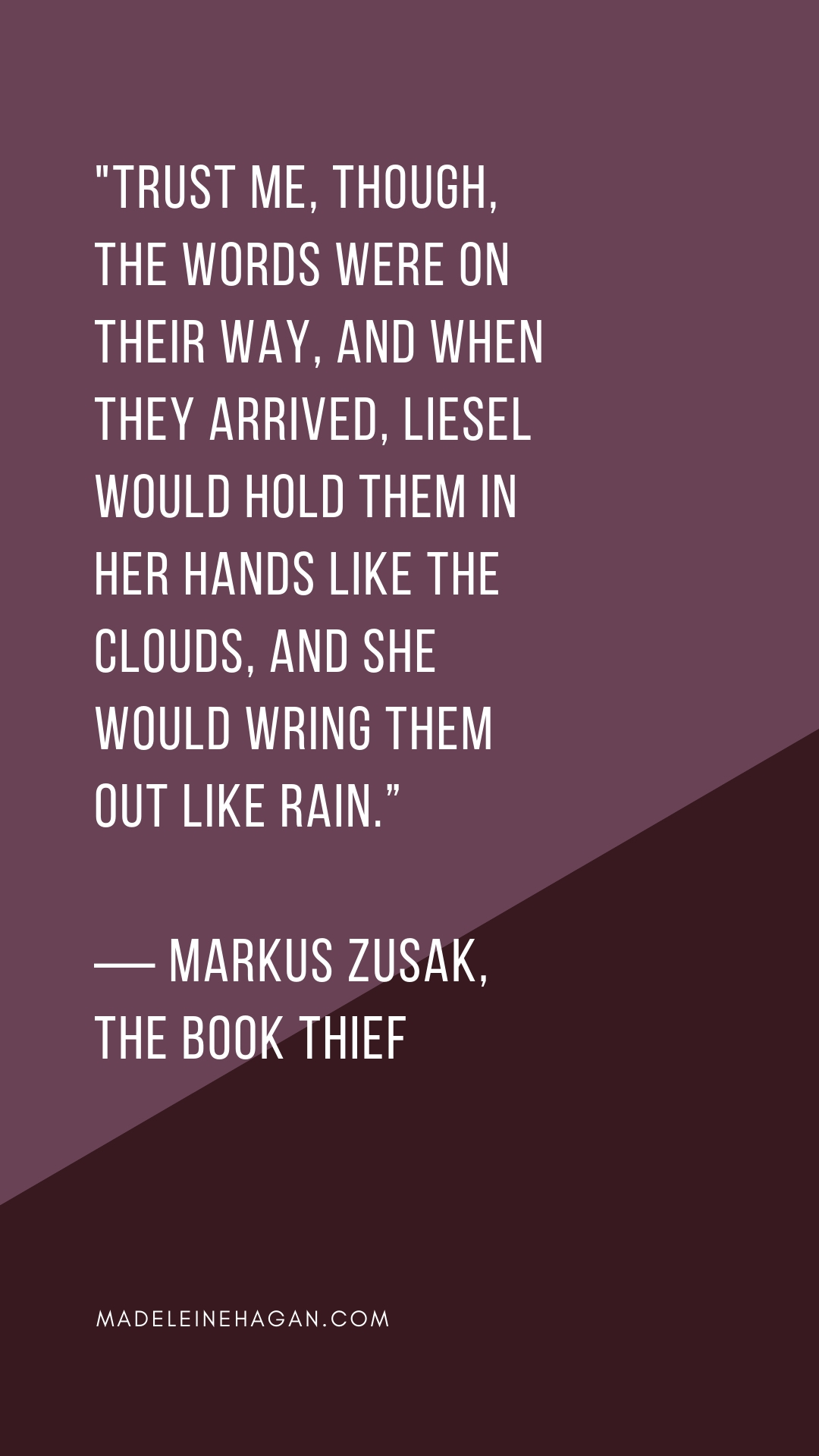 Even when you feel like you are not allowed to say it. There is no pressure to get the first draft correct. No one need see it but you. Write it out. Every ugly, selfish metaphor that needs to escape, creating space for what you’re actually wanting to say.

Start with all your excuses. The page isn’t afraid of them. They will cling to your fingers, not wanting to be exposed on the page, but you can write them out anyway in big, bold fonts. Then highlight them with your cursor and make the font size 8. (Sometimes we have to remind ourselves that our will controls the volume of our excuses and not the other way around.)

Continue the wringing. Just to spite that list of excuses, if for no other motivation.

This list will try to convince you it has crippling power. It doesn’t. You can type in spite of them anyway, even if it’s slow, like carving instead of drawing.

You’re putting the truth on paper in one form or another.

And the result doesn’t have to be impressive.

Stop trying to make it impressive.

Make it intentional instead.

Write every word out on purpose.

Stare at the blank page. Pretend the keyboard is a piano and get your fingers typing to that melody you can hear, even if gibberish comes out. Get frustrated when it takes 4 hours to type three sentences. Eat too many Cheez-Its. Go make tea. Highlight the lines in all your favorite books that make you stop breathing for a moment as you pause to read them again. Come back to the keyboard and write without stopping for a solid 20 minutes. Delete half. Do it again.

Never stop searching for what makes the words pour out effortlessly, like overflow, but don’t forget how to forcefully turn on the faucet yourself in the process.

If you limit your writing to the times you know exactly which words to use, you won’t write them at all. Cast them forward. Edit later.

And lastly, on days like this, remember the people who have believed in you from the start. Who believe that you still have what it takes to mine deep within you and bring into the light what matters most. Who will keep you from shrinking and smushing yourself into boxes you don’t belong in. Who will remind you of how essential you are, since your brain is currently doubting it.

Listen when they tell you that you don’t have drink the poison fear tries to present.

But there are also days when you are not afraid, and you do not feel smushed and small. When the weight of the untold story is not quite so heavy.

Listen to them when they remind you that those days will be back again.

Listen when they tell you:

You don’t have to wait for those days to return for you to matter and create beautiful things.

Twirl your pen. Think it over.

Keep rocking back and forth.

There is gold you can extract from days like this too.

Tell your productivity to take a day off, and begin anew on something fresh.

You can begin with your excuses but turn it into what you’re learning. 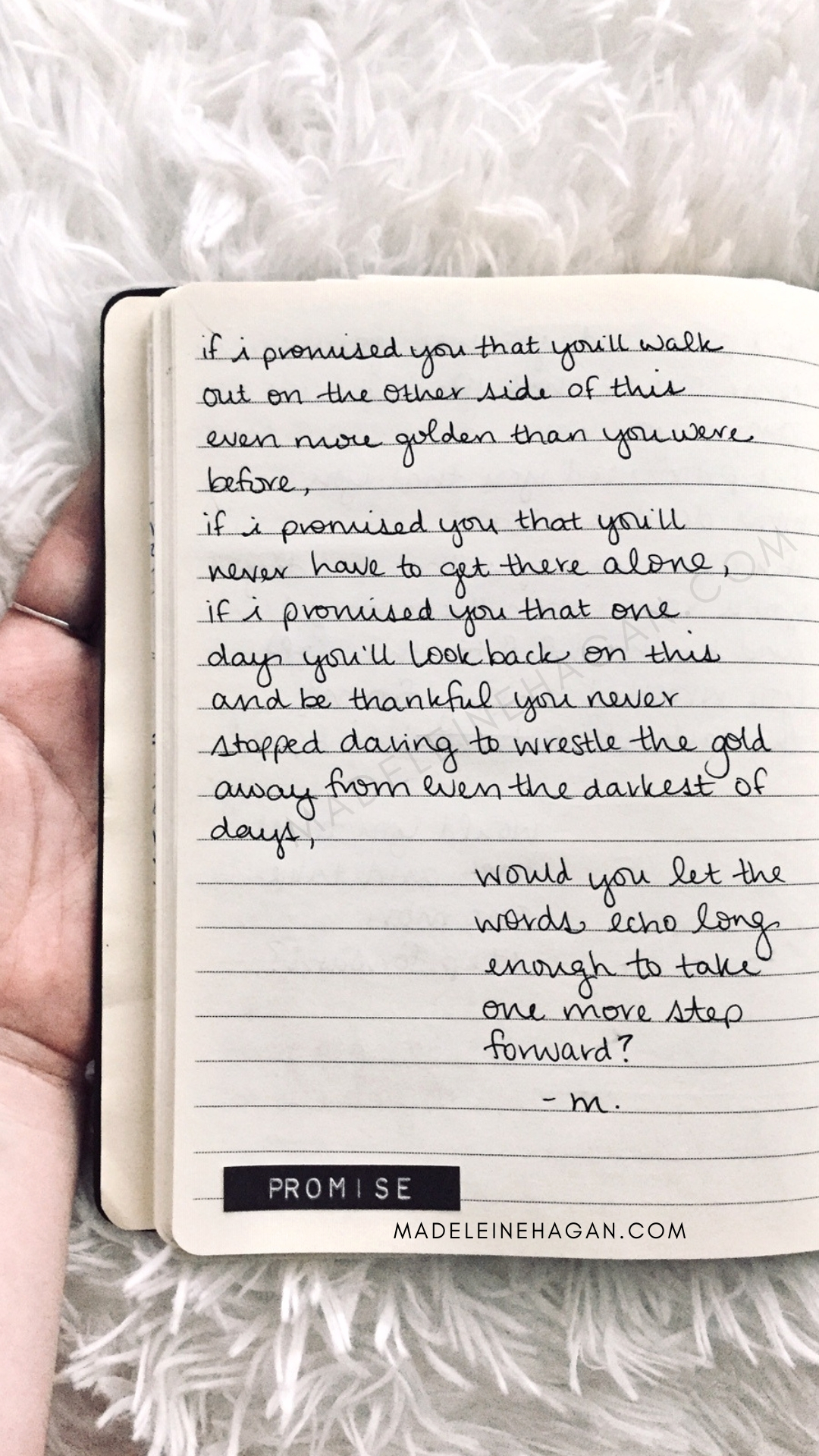